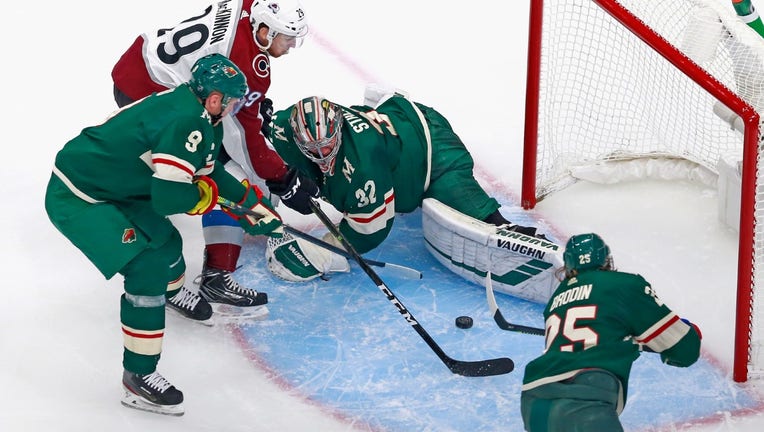 Alex Stalock #32 of the Minnesota Wild makes the second period save on Nathan MacKinnon #29 of the Colorado Avalanche in an exhibition game prior to the 2020 NHL Stanley Cup Playoffs at Rogers Place on July 29, 2020 in Edmonton, Alberta, Canada. ((Photo by Jeff Vinnick/Getty Images))

MINNEAPOLIS - After four seasons with the Minnesota Wild, Alex Stalock is headed to the Edmonton Oilers.

The South St. Paul native was claimed on Monday by the Oilers. Stalock was set to replace Devan Dubnyk as the Wild’s starting goaltender, then suffered an upper body injury before the team started training camp.

Stalock stepped in last year when Dubnyk couldn’t play, and the 32-year-old went 20-11-4 with a 2.67 goals against average and a .910 save percentage. He had four shutouts in 36 starts. He was nominated for the Bill Masterton Memorial Trophy, which goes every year to the player who exemplifies perseverance, sportsmanship and dedication to hockey.

He became the fifth goaltender in franchise history to record at least 20 wins in a season. Stalock set career highs in games played (38), games started (36), wins (20), minutes played (2,177), shots against (1,082) and saves (985). Stalock is the seventh different Minnesota-born goalie to reach 20 wins in a season.

"Not my department, but Al obviously has conducted himself so professionally in his work ethic and his team-first mentality and what he did last year through the bubble. I as a coach have the utmost respect for him. We wish him the best of luck," Evason said.

Stalock had just started practicing with the Wild and was preparing to be on the team's Taxi Squad before being claimed by the Oilers.

The Wild is on a six-game win streak after beating the L.A. Kings 4-3 in overtime Saturday night. They’re No. 2 in the Honda West at 12-6, and face the No. 1 Vegas Golden Knights Monday night.