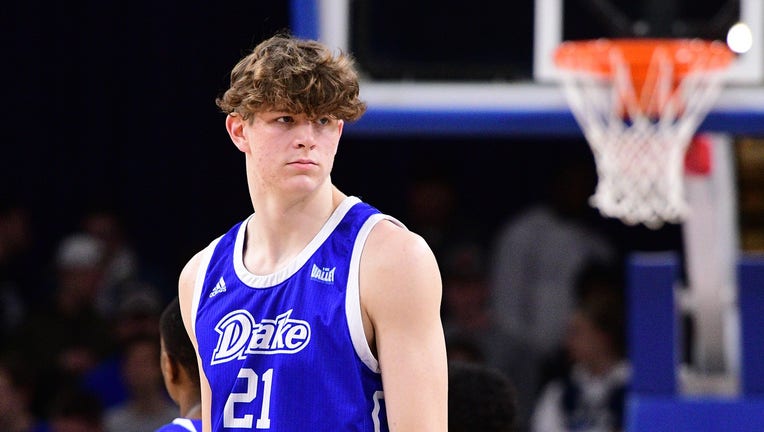 Drake Bulldogs forward Liam Robbins (21) looks across the court before the start of the Missouri Valley Conference college basketball game between the Drake Bulldogs and the Indiana State Sycamores on January 29, 2020, at the Hulman Center in Terre H ((Photo by Michael Allio/Icon Sportswire via Getty Images))

Drake transfer Liam Robbins, a 7-foot, 235-pound center, announced on social media Sunday night he has committed to the Gophers. In his sophomore season at Drake, Robbins averaged 14 points, seven rebounds and three blocks per game. He was named Second Team All-Missouri Valley Conference after the season. It’s a big improvement after he averaged 4.1 points and 2.7 rebounds per game as a freshman.

Robbins also has a family connection to the Gophers’ program. Ed Conroy, who was named the associate head coach on Saturday, is Robbins’ uncle. Scouts and national college basketball experts say Robbins has the potential to be a future NBA or professional player and is just scratching the surface of his potential.

He’s expected to make an immediate impact in the frontcourt, and the hope is he’ll replace Oturu immediately. Oturu declared for the NBA Draft after the season, and is expected to stay in the draft as most projections have him being a first round pick. The Gophers haven’t had a player drafted since Kris Humphries in 2004.

Robbins was widely considered one of the top center prospects in the country once he entered the transfer portal. Now the task for Pitino will be to seek a waiver that grants Robbins immediate eligibility. The NCAA is expected to vote on a new measure sometime this year that would allow college players to have one transfer without having to sit out a season.

As it currently stands, Robbins would have to sit out next season due to transfer rules. That can and likely will change.