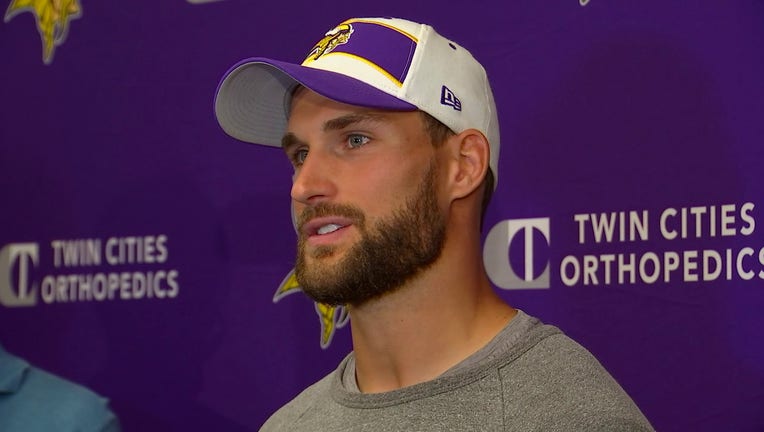 Eagan - Football is back, and now it’s real.

After nearly sixth months of offseason workouts, minicamp, organized team activities and Training Camp, the Minnesota Vikings kick off a highly-anticipated 2019 season Sunday against the Atlanta Falcons at U.S. Bank Stadium. It’s a fresh start for a team that badly needs it.

Now two years removed from coughing up an opportunity to play a Super Bowl in their home stadium, the Vikings fell flat in the big moments last year on the way to an 8-7-1 finish. They missed the NFC Playoffs for the third time in the last five seasons under Mike Zimmer.

Mike Zimmer and Kirk Cousins talked Wednesday about the expectations for the 2019 season after missing the playoffs last year.

The Vikings said it themselves after the way last season ended: There’s too much talent on the roster to not be in the postseason. There’s plenty of potential, but that’s all it is until they provide proof with on-field results.

“We have potential to be pretty good, yes. But it’s potential, so you’ve got to go out and do it,” Zimmer said. “You can have all the potential in the world and not play good.”

That’s what happened in the most pivotal moments last season. Missed field goals at Green Bay in Week 2. An inexplicably flat performance in a 27-6 home loss to the Buffalo Bills, and an even more inexplicable regular season finale in a 24-10 loss to a Chicago Bears team that had nothing to play for.

The beautfy of a new season is that's all now in the past, and it’s exactly where the Vikings intend to leave it.

It’s also motivation for a team that feels it has too much potential to be cleaning out their lockers on the Monday after the regular season, instead of getting ready for the playoffs. All that matters now is noon Sunday against Atlanta.

“Week 1, you just feel that sense of urgency and excited to get here. All of our work going back to even before we showed up in April, all the offseason workouts and different things we do, it’s all for right now,” said quarterback Kirk Cousins, who enters the second year of an $84 million, fully-guaranteed contract. “It’s important we put our best foot forward and get started the right way at home.”

The expectations have not changed after they failed to reach lofty goals set for lsat season. Cousins had one of his best statistical seasons, with more than 4,300 yards passing and 30 touchdowns. For various reasons, it didn’t translate to wins.

“I think we can be good, but it’s all talk and it doesn’t mean anything. Let’s go out and play. I don’t know if I’ve ever entered a season and said ‘Woe is us, we’re going to be terrible,’” Cousins said. “I expect us to play well, to put on a good showing, to compete in every game and beyond that, we’ve got to put the work in and prepare and make sure in those close moments at the end of games we make the plays to come out on top.”

It’s why the Vikings revamped their offense in the offseason, hiring Gary Kubiak as an assistant head coach and offensive advisor. Kevin Stefanski is in charge of the offense, and the top priority is getting back to running the football and controlling the line of scrimmage after the Vikings finished 30th in the NFL in rushing last season.

They might already see that trend changing. The Vikings led the league in rushing in the preseason, averaging 168 yards per game on the ground. Dalvin Cook only needed two carries to see his hard work paying off. His second attempt against the Arizona Cardinals went 85 yards for a touchdown.

Zimmer said at the end of last season the Vikings lost a mental edge, a toughness that’s usually a staple of the team. He’s hoping that’s changed, but he won’t know anything until Sunday.

The main goal: Get back on top of the NFC North. The Bears are aiming to defend the division title with a physically dominant defense, despite losing to the Packers 10-3 Thursday night. The Lions have an up and coming coach in Matt Patricia, and disciples of Bill Belichick are always dangerous. Then there’s the Packers, who are division contenders as long as Aaron Rodgers stays healthy.

“I think I’ve got to deal with three teams,” Zimmer said.

Though he didn’t practice Wednesday afternoon due to a hamstring injury, wide receiver Stefon Diggs spoke to the media about Week 1 being a clean slate and a fresh start. He said having a successful 2019 season comes down to putting in the work across the board.

“Put in the time, the effort and take it one game at a time. As far as like how good we can be, we’ve got a lot of talent, but talent doesn’t win games,” Diggs said.

He’s right, and the Vikings don’t have to look farther than last season to see that as proof.

Run the ball, get the ball to your playmakers, win the line of scrimmage and fly to the football on defense. That combination should have the Vikings back in the NFC Playoffs. Now they just need to prove it.