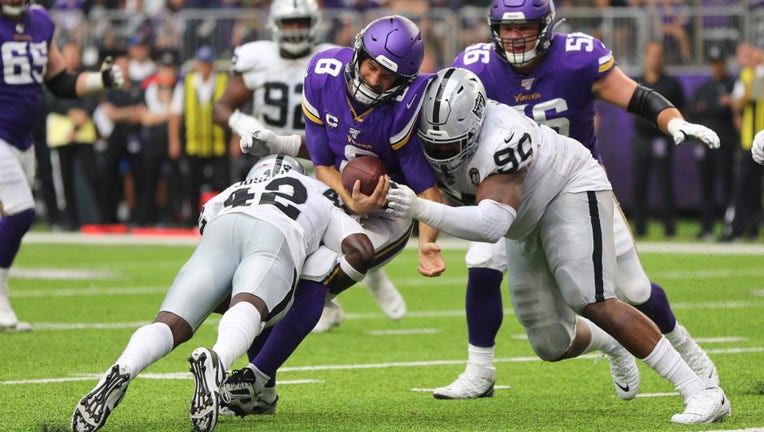 EAGAN - Mike Zimmer doesn’t seem the least bit concerned that the Minnesota Vikings are just 3-15 in their last 18 games at Soldier Field.

The Vikings have largely not played well in Chicago, and Zimmer didn’t have much of an explanation earlier this week.

“I don’t know, that’s what everybody told me when I got here and then we won some games. I guess if you turn the ball over, create penalties and you do dumb things, it’s a pretty hard place to play,” Zimmer said Wednesday. “I think they’ve lost their last two at home.”

Indeed, they have. The Bears managed just three points in a Week 1 home loss to the Green Bay Packers at Soldier Field. That other loss was to the Philadelphia Eagles in the NFC Wild Card Playoffs, and it ended their season after finishing 12-4 and winning the NFC North.

Both the Vikings and Bears find themselves in a pivotal spot entering Sunday’s game, each looking to avoid an 0-2 start in the NFC North. The Vikings had a winnable game at Lambeau Field slip away after Kirk Cousins’ costly interception in a 21-16 loss in Week 2.

The Vikings bounced back last week, albeit out of the division, with a dominating 34-14 win over the Oakland Raiders.

“The wins over Atlanta and Oakland don’t count any less, but in a division game knowing that our division appears to be very strong this year, we’ll take any win we can get. We need to get as many as we can, especially if you can get one on the road,” Cousins said. “Very important, we understand that but this is big boy football. Chicago knows that too. We’re not going to have any extra motivation that Chicago doesn’t have. It’s going to go in there with two heavyweights and one’s going to emerge with a victory.”

Cousins having a big game at Chicago could be a big factor in the Vikings getting their first road win of the season, and he’s well aware. He was 30-of-46 passing for 262 yards, two touchdowns, a pair of interceptions, was sacked twice and had a 76.5 rating in a 25-20 loss last year. With a playoff spot on the line in Week 17, Cousins was 20-of-33 for 132 yards, one touchdown and a 79.4 rating in an inexplicable 24-10 loss to the Bears at U.S. Bank Staidum.

Running the ball against the Bears’ defense is no easy task. They’re fifth in the NFL in rushing defense, allowing just 68.7 yards per game. They haven’t allowed a 100-yard rusher since late in 2017. Cook has three straight games with at least 110 yards rushing, so something has to give.

“It doesn’t surprise me. They may not this week either. But it’s important that we try to run the football. Maybe we don’t get 100, but we get 98 so who cares? As long as we win the football game I don’t really care,” Zimmer said.

In two losses last year, Cook had 20 carries for just 51 yards. He knows his number will be called Sunday.

For the Vikings’ defense, Sunday comes down to containing Mitchell Trubisky. He’s coming off his best performance of the season, throwing for 208 yards and a touchdown in a road win over the Washington Redskins on Monday Night Football. He was helped by his defense forcing five turnovers.

Trubisky tends to make just as many plays with his feet against the Vikings, whether it’s evading the pass rush or running for positive yards. Trubisky put up modest numbers in two wins over Minnesota last year, with 38 completions for a combined 328 yards, one touchdown and two interceptions.

The Vikings’ defense has 10 sacks through three games, and getting pressure on Trubisky will be a focus.

“That’s kind of what it is. It always comes down to the last five or 10 minutes of the football game. We’ve just got to be good when it matters most,” said linebacker Anthony Barr, who expects to be back Sunday after missing last week with a groin injury.

The bottom line is the Vikings can’t afford to start 0-2 within the division if they have any intentions of contending for the NFC North title. It’s going to take a full 60-minute effort.