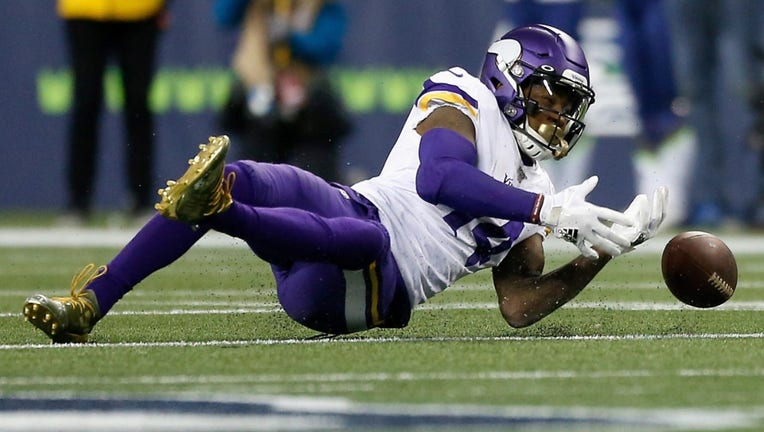 Wide receiver Stefon Diggs #14 of the Minnesota Vikings drops a pass during the game against the Seattle Seahawks at CenturyLink Field on December 02, 2019 in Seattle, Washington. ((Photo by Otto Greule Jr/Getty Images))

MINNEAPOLIS - The Minnesota Vikings fell to 8-4 on the season after letting an opportunity slip away in a 37-30 loss at Seattle on Monday Night Football.

Perhaps most disappointing was Mike Zimmer’s defense, which got carved up for 218 rushing yards and 444 total yards. Both numbers are season-worsts for the Vikings, as are the four touchdowns they allowed.

The Vikings are a full game behind the Green Bay Packers in the NFC North with four games to play, and have all three division opponents at home in three of the final four games. The Vikings led 17-10 at the half, but the Seahawks scored 24 straight points on a series of Minnesota mistakes and hung on for the victory after a late charge from Kirk Cousins, who now drops to 0-8 on Monday Night Football after nearly leading the Vikings back from 17 points down in the fourth quarter.

That's despite Anthony Harris intercepting a Russell Wilson pass that was tipped by Armon Watts, and again by Wilson, and taking it 20 yards for a touchdown. It gave the Vikings a 14-7 lead in the second quarter.

But the Vikings' defense couldn't stop the Seahawks' punishing run game. Chris Carson and Rashaad Penny combined for 176 rushing yards and a pair of touchdowns. Penny added a receiving touchdown.

All eyes for the Vikings after the game are on running back Dalvin Cook, who finished with just nine carries for 29 yards and a touchdown. Cook was injured early in the third quarter after fumbling on a play where the Seahawks recovered. Seattle took its first lead of the game at 20-17 after the Vikings held them to a field goal.

Cook went straight to the locker room and came back to the sideline, but never returned to the game. He was listed as questionable to return with a chest injury, and told reporters after the game he's fine and expects to play Sunday against the Lions.

Cook scored the Vikings’ first touchdown of the night on their opening drive after Cousins hit C.J. Ham for 36 yards, and Stefon Diggs took a jet sweep 27 yards to the 2-yard line to set up Cook’s score.

Xavier Rhodes was at the center of a rough third quarter for the Vikings. He got flagged for personal foul on a hit out of bounds finishing a tackle. Three plays later, Penny scored from 1 yard out to tie the game 17-17. Rhodes also gave up a long touchdown later in the quarter that got him benched for two defensive series as the Seahawks took all the momentum. He let David Moore go free for a 60-yard touchdown on the play, expecting help in coverage from safety Harrison Smith, who was up near the line of scrimmage at the snap. The touchdown gave the Seahawks a 27-17 lead. Rhodes was heated with coaches and teammates on the sideline after about where the miscommunication was.

To compound matters, Diggs bobbled a Cousins' pass on the next Vikings’ drive, which Seattle intercepted. Three plays later, Russell Wilson hit Penny for a 14-yard touchdown to give the Seahawks a 34-17 lead with 13:30 left.

Rhodes later bounced back to force a Seattle fumble in the fourth quarter, which the Vikings turned into six points. Rhodes did not speak with reporters after the game.

Facing that deficit, Cousins led a pair of touchdown drives with scores to Laquon Treadwell and Kyle Rudolph to get within 34-30. Cousins hit Treadwell for a 58-yard score on a blown Seattle coverage. It was the longest catch of Treadwell’s career. Cousins later hit Rudolph on a 3-yard touchdown where he made a one-handed catch to get the Vikings within 34-30 after Dan Bailey hooked the extra point left.

Cousins finished the night 22-of-38 passing for 276 yards and two scores. In Cooks absence, Mattison had four carries for 22 yards and four catches for 51 yards.

Seattle had the final answer, running over the Vikings' defense to get into field goal range for the final margin.

The Vikings now likely need to win out against the Lions, at the L.A. Chargers, against the Packers and Bears to have any shot at winning the NFC North and earning a home playoff game.