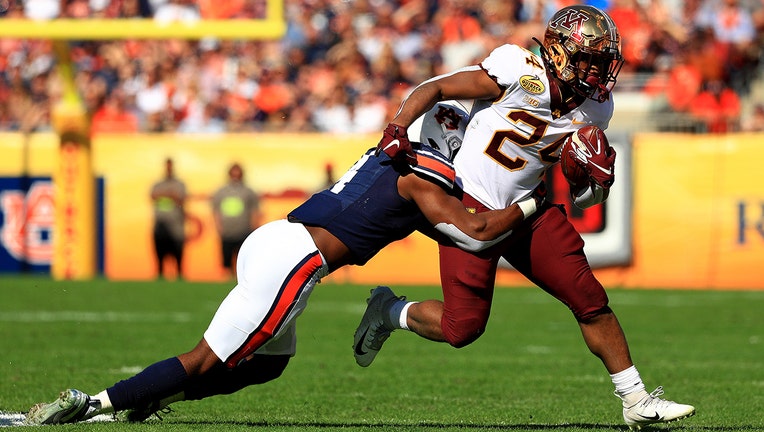 TAMPA, FLORIDA - JANUARY 01: Mohamed Ibrahim #24 of the Minnesota Golden Gophers rushes during the 2020 Outback Bowl against the Auburn Tigers at Raymond James Stadium on January 01, 2020 in Tampa, Florida. (Photo by Mike Ehrmann/Getty Images)

MINNEAPOLIS - Coming off its best season in 115 years, expectations for the 2020 season are high for the University of Minnesota football program despite off-season limitations with the Covid-19 pandemic.

The Gophers, in the third season under P.J. Fleck, finished 11-2 after beating Auburn in the Outback Bowl 31-24 on Jan. 1. Minnesota’s only losses came at Iowa after getting off to a 9-0 start, and in the regular season finale against rival Wisconsin. A victory over the Badgers would’ve earned a West Division title, and sent Minnesota to the Big Ten title game against Ohio State, and most likely the Rose Bowl.

The Gophers finished the season ranked No. 10 in the final Associated Press poll. That hasn’t happened in more than 50 years. But at least one national outlet has Minnesota taking a step back in 2020.

Minnesota has at least seven starters and nine regular contributors to replace on defense.

Here’s a look at how the schedule shakes out, according to College Football News.

The Gophers have four straight home games to start the season, and under this scenario, get off to a 5-0 start before stumbling at Wisconsin and at home to Michigan in a stretch that includes three losses in four games. Minnesota has beaten Wisconsin just once in the last 15 years, and didn’t take advantage of a huge opportunity at home last year with the West Division title on the line.

More puzzling are two losses in the last four games of the season, at Michigan State and at Nebraska. The Spartans went 7-6 last year, including 4-5 in Big Ten play, and head coach Mark Dantonio was on the hot seat before he abruptly resigned in February amid reports of multiple recruiting violations. The Gophers did not face Michigan State last season.

Scott Frost is potentially on the hot seat at Nebraska in 2020 after a 5-7 season last year, including just three wins in Big Ten play. The Gophers beat the Cornhuskers 34-7 last year, which was the start of a four-game losing streak for Nebraska. Frost is 9-15 in two seasons at Nebraska.

Minnesota hopes to be contending for a Rose Bowl bid in 2020, and should enter the preseason rankings in the top 20 in the country.