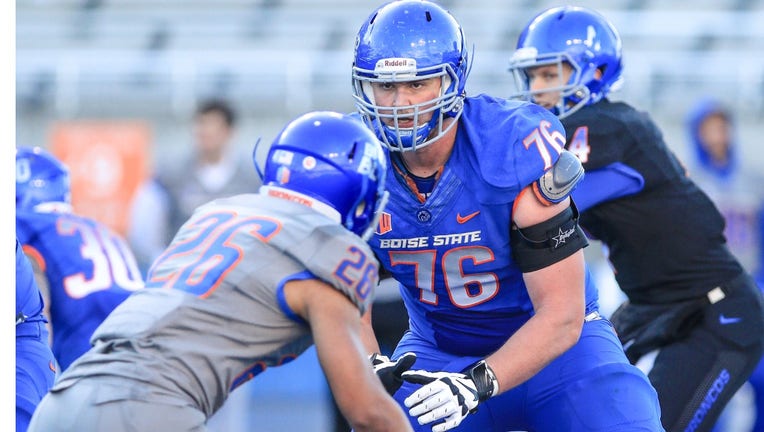 MINNEAPOLIS - Ezra Cleveland was so excited to get the life-changing phone call Friday night in the NFL Draft, he almost didn’t know who he was actually on the phone with.

The L.A. Rams were on the clock in the second round Friday, and Cleveland’s phone rang. His confusion started when the Rams weren’t on the other end of the conversation. It was Minnesota Vikings General Manager Rick Spielman. The Vikings were going to take him with the No. 58 pick in the second round.

His NFL dream was becoming a reality.

“I was like Vikings? Oh sweet and I was just super excited,” Cleveland said. “I absolutely can’t wait for this opportunity. Sitting there, I really wanted the Vikings to draft me. I like the cold weather better than hot weather. I think all the factors were pointing to me going there.”

The first person he reached out to after the Vikings took him in the second round? His old and now new teammate, running back Alexander Mattison. The running back, entering his second season with the Vikings, was teammates with Cleveland two years ago at Boise State.

In fact, Cleveland helped create running lanes for Mattison in their zone run scheme, which is similar to what the Vikings ran last season on the way to becoming the No. 6 rushing offense in the NFL.

“I was screaming pretty loudly. The neighbors probably heard me. I was jumping up, super excited. I was super proud of him, just for this moment. We’re reunited and it feels amazing,” Mattison said last Friday.

For Spielman, adding to the offensive line was essential after the Vikings weren’t able to pull off a deal to acquire Washington Redskins star Trent Williams. Spielman, in a surprise offseason move, needed offensive line depth after releasing Josh Kline.

“Very excited about Ezra Cleveland falling to us in the second round,” Spielman said. “He fits everything we’re looking for from a schematic standpoint.”

Cleveland was strictly a defensive lineman in high school and came to Boise State having to convert to the offensive side of the ball. He says he tries to emulate Joe Thomas and David Bakhtiari, two of the best left tackles in the NFL.

Cleveland played left tackle for three years at Boise State, spent some time at right tackle and even practiced at guard. He doesn’t have a preference for what he’ll play in the NFL.

“I’m 100 percent ready to go wherever the coaches plug me in. I’m a team player and I look forward to playing any position I’m needed to play,” Cleveland said.

Cleveland is 6-6 and listed at 311 pounds. He proved his athleticism at the NFL Combine, getting 30 reps on the bench press and running a 4.93 40-yard dash.

He started 40 career games at Boise State, and was named First Team All-Mountain West Conference two straight seasons. The Vikings offensive coaches think he compares to when they drafted Brian O’Neill in the second round in 2018.

“He’s mature, he’s tough, he’s a grinder. He loves football,” said Jamaal Stephenson, the Vikings’ director of college scouting. “We think he’s a guy who’s going to come in and be able to help us right away.”

Cleveland feels like he’s a perfect fit for Minnesota. He’s the athletic type they want for their run scheme, and the Washington native says he enjoys cold weather and loves the snow.

Now, his job is to master the Vikings’ playbook as the team’s off-season virtual program started Monday, and do what he can to get to know his new teammates. He’ll do whatever it takes to be ready when the Vikings convene for the first time since the Coronavirus pandemic shut sports down. He could even compete for a starting job on the offensive line.

“I’m going to go there and show what abilities I have, work with a chip on my shoulder and do the best that I possibly can for that organization,” Cleveland said.