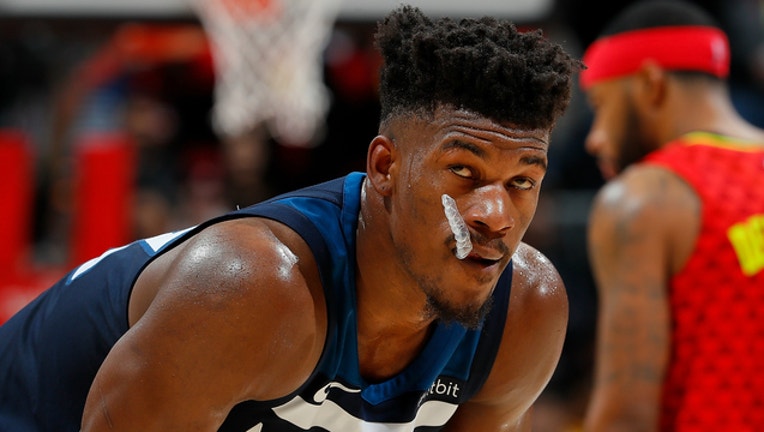 MINNEAPOLIS (AP) - Jimmy Butler could return to the court for the Minnesota Timberwolves before the end of the regular season, if he continues to stay on track with his rehabilitation from surgery on his right knee.

He's predictably having a hard time sitting and waiting.

Butler spoke to reporters Sunday for the first time since the meniscus injury he suffered Feb. 23 at Houston , confirming an initial recovery estimate of four to six weeks after the Feb. 25 procedure. Even on the long end of that timetable, he'd likely have two games with the Timberwolves before the postseason.

That's if they hang on to their spot, of course, but Butler said he's confident that will happen. He expressed an equal amount of faith in his ability to heal in time.

"I can't give you the exact date, but I want to come back and I want to help," said Butler, who sat courtside during the 129-120 loss Sunday to the Rockets in his first appearance on the bench since he was hurt.

Wearing a black sport coat with, yes, gray sweatpants, Butler was on his feet often to shout encouragement to his teammates and even did some dancing during a timeout down the stretch when the Wolves had pulled within five points during their spirited comeback. The defeat, though, dropped them into eighth place in the Western Conference with a game Tuesday against the ninth-place Los Angeles Clippers.

"I have a little bit of time left, but I know my guys are going to stick this thing out and do what they've been doing, keep us in this race," Butler said. "And when I come back, we'll see what we have left in the tank."

Butler has been able to do some running and shooting, with what he called an important week ahead in the rehab process.

"I just want to play. I feel like I've done this long enough to know that I can still go out there and make something happen," Butler said. "Now, I promise you I'll be out of shape. I promise you that. But just getting out there and getting back in a rhythm of things, that's going to come natural."

The affable four-time All-Star, whose arrival before the season has not only lifted the Wolves offensively and defensively but given them a needed dose of tenacity, acknowledged that his knee felt worn down in the weeks leading up to the injury. He's averaging 37.1 minutes in 56 games, the second-most in the NBA.

"I can't say I know it was coming, but I knew that my knee was sore. Hints, things that happened, before I went down," Butler said. "Everybody had something to say about it, but like I said before, I know my body better than anybody."

Would he have preferred to reduce his workload, in hindsight?

"You have to risk it for the biscuit," Butler said, "and that's what I'm about. I'm not one to sit out if I can play. I want to compete, to show that I'm one of the better players to do this. I'm here for a reason. I want to help my team win."

The Wolves are 4-5 since Butler went out.

"Never nervous," Butler said. "I'm confident when I'm out there on the floor with those guys. When I'm not, I'm still confident. I know what they're capable of. I know how everybody wants to do great things, how they want to see this organization in the playoffs, and they're going to do everything in their will and their power to make it happen."