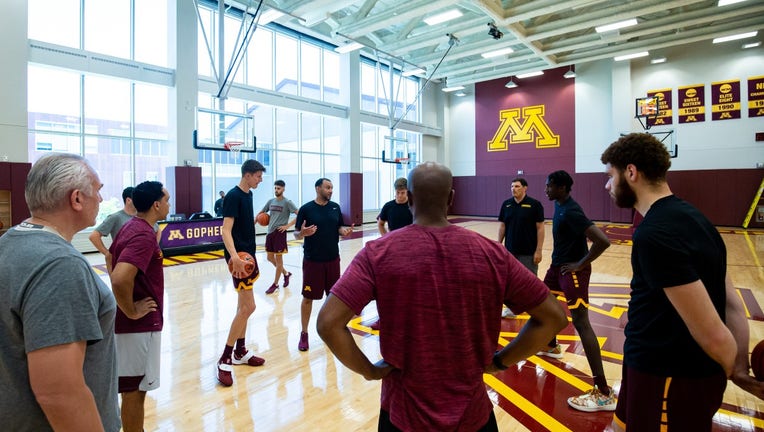 MINNEAPOLIS - After eight weeks of summer workouts, the University of Minnesota men’s basketball team held its first official day of practice for the 2021-22 season on Tuesday.

It’s the first season for Minnesota alum Ben Johnson as a head coach, and he has a huge task ahead. Johnson was hired on March 22 to replace Richard Pitino after a 14-15 season, and the Gophers will feature as many as 10 new players for the upcoming season.

Only two players are back from last season, Isaiah Ihnen and Eric Curry. Ihnen suffered a season-ending knee injury over the summer. Johnson also brought back guard Payton Willis, who played for the Gophers two years ago before spending last season at College of Charleston.

Johnson’s top priority for the program in his first season is building chemistry, and a foundation. He wants the Gophers’ identity to be built around player development, toughness and being about the team.

"That’s going to be a constant. We have to be the team of all teams, we have to lead the league in high-fives and butt slaps. I think with this team it’s going to be somebody different every night," Johnson said. "Everybody has got to feel like they’re a part of it."

With so many new faces from different backgrounds, Johnson’s message on social media has been consistent with the hashtag "C2F." Committed to Family. He wants his players together as much as possible, whether it means being out on campus or in the athletic facility getting shots up.

"They had a group chat going before they even got to campus, and once they stepped foot on campus it was like they’ve known each other forever," Johnson said. "That’s the awesome part about it. The foundation piece that we’re building, that’s got to be the standard."

The Gophers held a scrimmage last Saturday, and Tuesday, media got to see the last 20 minutes of practice. In that session, Willis made a 3-pointer, junior college transfer Abdoulaye Thiam took a steal the length of the court for a lay-up and foul, and Luke Loewe hit a 3-pointer after a defensive stop.

Johnson was brought into give local recruiting a boost for the Gophers, and it’s not just with high school players. The 2021-22 roster includes transfers with local ties including Jamison Battle (DeLaSalle), Sean Sutherlin (Irondale) and Parker Fox (Mahtomedi). They also have Alexandria native Treyton Thompson, Eastview’s Jackson Purcell and Will Ramberg from Grand Marais.

Fans will need to be patient in Johnson’s first season. His two players with high major Division I experience over a full season? Curry and Willis.

"The good part is that I’ve got a lot of guys that are trying to prove themselves," Johnson said.

The Gophers start the 2021-22 season with a Nov. 1 exhibition against Concordia-St. Paul. The regular season opener is Nov. 9 against Kansas City.