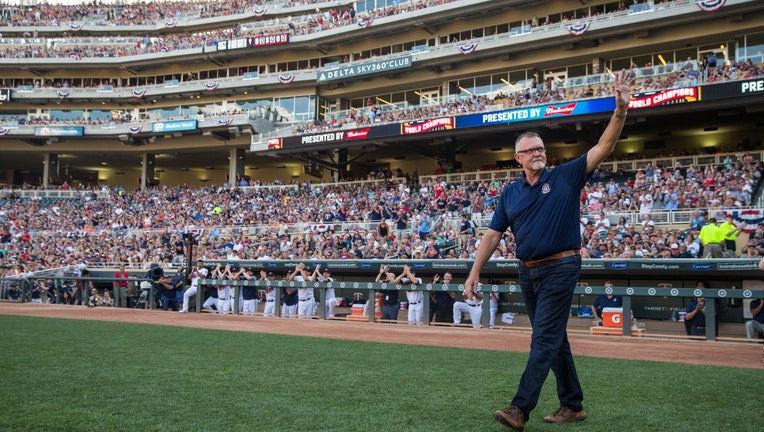 MINNEAPOLIS, MN- JULY 22: Former player and Hall of Fame member Bert Blyleven of the Minnesota Twins during a ceremony honoring the 30th anniversary of the 1987 World Series Championship prior to the gameagainst the Detroit Tigers on July 22, 2017 at

MINNEAPOLIS (FOX 9) - Beloved Minnesota Twins broadcaster Bert Blyleven announced his final game from the broadcast booth Wednesday night as he transitions into a special assistant role in the organization, the club announced Wednesday.

The Twins sent him off with an 8-1 win over the Chicago White Sox at Target Field, with home runs from Jake Cave, Miguel Sano and Eddie Rosario, and six solid innings from Jose Berrioes. Blyleven's final broadcast capped off 25 seasons as an announcer on television and radio.

The Twins honored Blyleven with a brief pregame ceremony that was far different from normal, with no fans in the stadium due to the COVID-19 pandemic. After pregame introductions, players and coaches gave Blyleven a tip of the cap from the first base line as he got ready for his final call.

Blyleven also got his telestrator out, circling Minnie and Paul above the center field fence. Blyleven's trademark, in addition to being an analyst, was circling fans on TV with large signs at games throughout the season.

He has earned 10 Emmy Awards during his work with FOX Sports North since 2006, and the "Circle Me Bert" phenomenon started in 2002 as a vehicle to raise funds toward developing a cure for Parkinson’s disease along with other charities.

Former Twins first baseman and fan-favorite Justin Morneau will likely take over as the primary analyst for Twins games on Fox Sports North. They also have Roy Smalley, Jack Morris, LaTroy Hawkins and Glen Perkins fill the role throughout the season.

Blyleven will be no stranger to the organization, however. The National Baseball Hall of Famer will take on a special assistant role that will include engagement with fans and partners and on-field instruction for the Twins during Spring Training.

In a statement to Twitter Wednesday, Blyleven said, “For 25 years I have had the privilege to be part of the Twins broadcast team. Tonight sad to say will be my last Twins broadcast. But I will continue to serve my role as a Special Assistant for future years.”

“While his on-field contributions for the club are well-documented, we are truly grateful for Bert’s 25 years of introducing new Twins fans to the game through his stories, insight and analysis on our television broadcasts,” said Twins President and CEO Dave St. Peter. “He is a great ambassador for baseball, and we look forward to his continued role with the Minnesota Twins. Bert, you are hereby circled!”

Blyleven began as a full-time Twins analyst in 1996 for the Midwest Sports Channel. He has worked with current Twins play-by-play voice Dick Bremer since then. Before his broadcast career, Blyleven was a star on the diamond, breaking into MLB at age 19.

He holds the Twins record with 2,035 strikeouts and is second in franchise history with 149 wins.

Blyleven and his wife live in Ft. Myers, Florida and have six children and eight grandchildren.