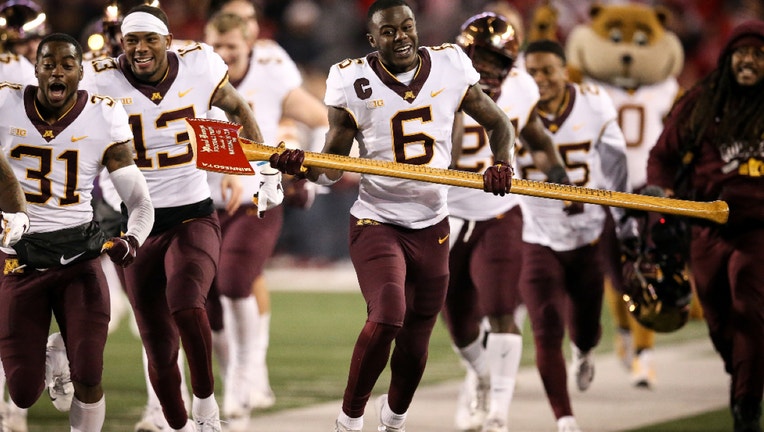 MINNEAPOLIS - It’s Axe Week at the University of Minnesota.

That’s enough for anybody at the Larson Football Performance Center on campus to be a little more amped up in practice, a little more locked in on team meetings. The Gophers (3-3) travel to Camp Randall Stadium to take on the Badgers (2-3) on Saturday.

It’s Champions Week for the Big Ten. Ohio State will face Northwestern for the Big Ten title. For the Gophers, it’s a one game championship season against Wisconsin, their biggest rival. The team found out Sunday the match-up was official, after the Nov. 28 game was canceled due to COVID-19 issues within the Minnesota program.

Tanner Morgan, Boye Mafe and Mo Ibrahim spoke Tuesday about when they learned of the match-up, and coming back with the Axe in 2018.

Mo Ibrahim was named the Big Ten Running Back of the Year on Tuesday. Despite having two games canceled, Ibrahim leads the Big Ten with 925 rushing yards and 15 touchdowns. He’s run for at least 100 yards in six games this year, and has a pair of 200-yard games. He ran for 123 yards and a touchdown in the 2018 win.

Ibrahim on when the Gophers found out they would face Wisconsin: ‘There was rumors going on after the game got canceled that they might do this, reschedule them for this Championship Week. We was hoping and praying for it, and we finally got the news on Sunday. We was all excited just to have the opportunity to play for the Axe again. That’s the game that we circle every year, knowing that it’s going to be a big one for both sides.”

Ibrahim on the celebration when they brought the Axe home in 2018: “We bussed to Wisconsin that year, so we was on the bus for like three hours. We saw a tweet come out that fans could come to the facility. We didn’t know how many people was going to pop up, but once we got off the bus and saw that the indoor was halfway to three quarters filled, that was pretty amazing. That actually put in perspective how big this game actually is and what it means to the whole state of Minnesota. That was an eye opener and made me understand how big this game really is for the whole state of Minnesota.”

Tanner Morgan was just getting comfortable as the Gophers’ starting quarterback, with Zack Annexstad out injured, when they went to Camp Randall in 2018 and won. He was 9-of-16 for 124 yards and no turnovers, while Minnesota ran for 208 yards against Wisconsin. He led Minnesota to an 11-2 season last year, and wants nothing more than to bring the Axe back to Minnesota.

Morgan on getting Wisconsin rescheduled: “Everyone was really excited obviously to be able to play for the Axe, to be able to play Wisconsin. Awesome, very grateful that the Big Ten allowed it to happen. I think it goes again to our leadership with President (Joan) Gabel, Athletic Director (Mark) Coyle, everything they’ve done for us, for the entire university has been at an elite level throughout this entire pandemic. Couldn’t be more thankful for the leadership we have at this university.

On the celebration after the 2018 win: “You could see how much it meant to people, you could see how much the Axe meant to our fans. To have everybody in the indoor, I’ll never forget that. The sheer excitement on people’s faces, even at the stadium too after we won the Axe, people stayed out there for an hour with us just watching us with the Axe. It meant a lot to our fans and we know that, it obviously means a lot to us, I think that was something I’ll never forget and it’s something our team will never forget as well.”

Boye Mafe was an integral piece of the Gophers’ 24-17 win at Nebraska on Saturday. He got one sack and forced a fumble of Adrian Martinez. For the season, he has 20 tackles and 4.5 sacks. Mafe, a homegrown Minnesota kid who starred at Hopkins, gets his chance Saturday as a defensive leader to face the Badgers.

Mafe on his reaction to getting to play Wisconsin: “I mean this is the rivalry that everyone, you dream of, especially me being from Minnesota and being a Minnesota homegrown kid. This rivalry means everything to us. To have it taken away from us hurts. When the game was canceled, we were all hurt as a team and we all wanted to be in that game. Now that it’s back, it’s time. Now we have a chance to play Wisconsin, it’s time to go out there and play.

Mafe on the 2018 celebration: “For me as a Minnesota kid, it meant the world to win the Axe in Madison and bring it home. It was something that just felt so good. As a team, we stayed on the field for an extra 30 minutes after we won the game just because it was a euphoric feeling for the team. To bring it back home to the fans, and the best thing about it was when we got back here, our fans, our alumni, the guys who played here for years before I even was a Gopher. The fact that we were able to share that with them was what stood out to me. It wasn’t just us as a team sitting there celebrating, it was the state of Minnesota there celebrating.

It’s Axe Week for the University of Minnesota. Not much else to say.