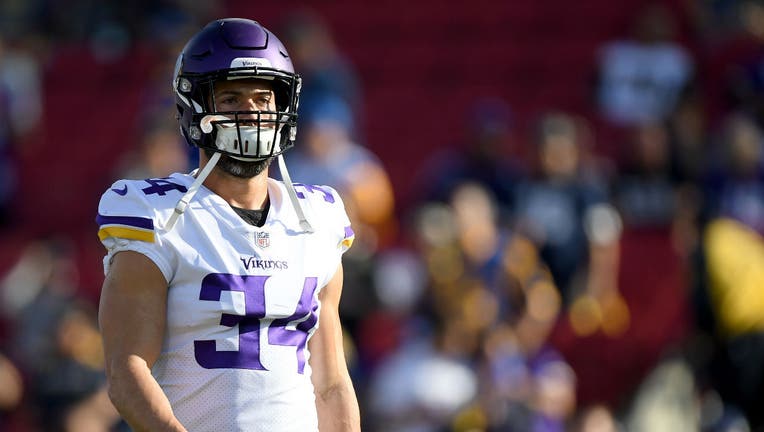 EAGAN - His nameplate wasn’t on his new locker yet at TCO Performance Center Thursday afternoon, but Andrew Sendejo is back with the Minnesota Vikings.

Sendejo, a nine-year veteran, went through stretching before practice and went through medical clearances before the Vikings get set to travel to Dallas to face the Cowboys on Sunday Night Football. The Vikings claimed Sendejo off waivers after he was released by the Philadelphia Eagles.

His role with the Vikings is to be determined, but he’ll likely provide depth at safety behind Anthony Harris and Jayron Kearse. He could also have a role on special teams.

“We think a lot of Sendejo, always have. He’s a smart, tough, physical football player. I think he brings a lot to us as a team, so we’ll just have to see how he does catching back up,” defensive coordinator George Edwards said Thursday.

Sendejo saw action in eight of the Eagles’ nine games this season, making 26 tackles, two tackles for a loss, two quarterback hits and one interception.

He was on the field earlier this season at U.S. Bank Stadium, when the Vikings beat the Eagles 38-20. He made two tackles and intercepted a Kirk Cousins’ tipped pass. He’s probably most known this season for accidentally knocking out his own teammate in a Week 4 win over the Packers. He was trying to make a tackle when he collided with Avante Maddox, who spent the rest of the night in a hospital.

Sendejo spent eight seasons in Minnesota and played in just five games last year before being cut in the offseason, and signing with the Eagles. His teammates are welcoming him back with open arms.

“Awesome having Dejo back here, obviously he’s a great player. Not only is he a great safety, he’s great on special teams. He’s a guy that made his career in this league on special teams, so he’ll give us a big lift,” Vikings tight end Kyle Rudolph said.

In his previous eight seasons in Minnesota, Sendejo appeared in 93 games and made 58 starts. He recorded 341 tackles, one sack, got six interceptions and had 17 passes defended.

He’s also known for his violent approach to the game. In eight seasons with the Vikings, he was flagged five times for unnecessary roughness. Sendejo sent a message to the NFL during Vikings training camp last year, showing up to practice in August with a “Make Football Violent Again” hat in response to new rules about protecting quarterbacks and roughing the passer calls.

His best seasons with the Vikings were from 2015-17. He had a combined 216 tackles and five of his seven career interceptions during that stretch. His veteran experience was attractive to the Vikings.

“I think that was the big thing, familiarity with him, what he brings to the table as far as a football player. We all know he’s a smart football player, he’s aggressive and we really think he’s a good teammate,” Edwards said. “A good guy to have in the meeting rooms, what you see is what you get out of him, and we like what we see out of him.”

Sendejo did not practice on Thursday, and was listed on team’s injury report with a groin issue. His playing status for Sunday night as not yet been determined.