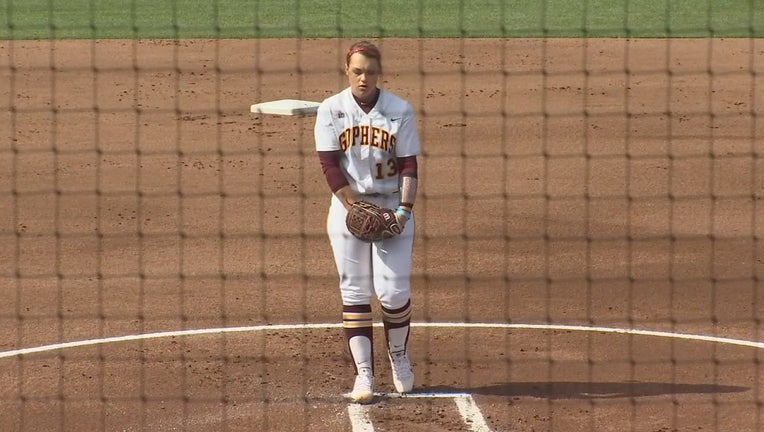 Amber Fiser, a senior Minnesota Gopher pitcher, is facing an uncertain future for her playing career after the season was cancelled due to coronavirus. (FOX 9)

MINNEAPOLIS - It appears the University of Minnesota softball team will have at least one senior All-American back next season.

At a time when softball season should be in full swing, the pings of the bat and pitches hitting the mitt are replaced with silence at Jane Sage Cowles Stadium.&nbsp;

Pitcher Amber Fiser announced on Twitter she plans to return to the Gophers next year. She’s one of many senior athletes who had their season come to an end after the NCAA shut down all winter and spring sports due to the Coronavirus pandemic.

Earlier this week, the NCAA announced it had passed a measure that would allow senior athletes in spring sports to return for one more season.

The Gophers softball team was at a tournament in Hawaii when it got word that the season had been canceled. Minnesota was 15-9-1 at the time, and Fiser was 10-7 on the season in 21 appearances and 15 starts, having allowed 31 earned runs while striking out 145 and issuing just 36 walks in 100 innings pitched.

Fiser as an All-American coming into the season. She finished 31-9 last year with a 1.27 ERA and had 346 strikeouts in helping lead the Gophers to the College World Series.