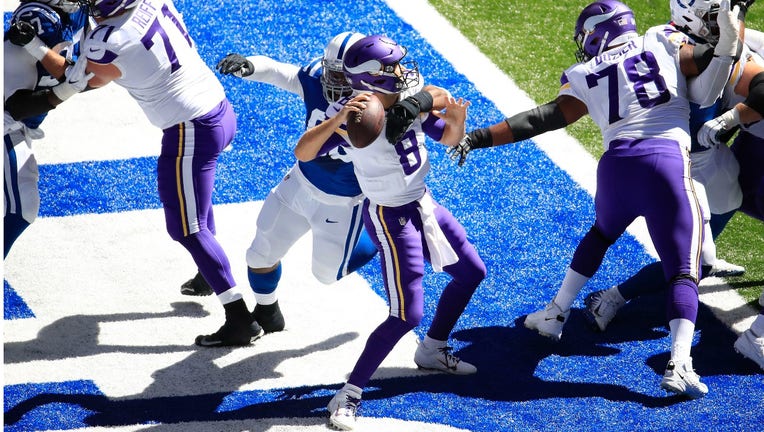 MINNEAPOLIS - The NFL season is only two weeks old, and it already feels like the Minnesota Vikings are at a crossroads for their 2020 fate.

The Vikings are 0-2, have key players on injured reserve and face teams the next three weeks that were playoff teams in 2019. They’re coming off one of the worst performances in six-plus seasons under Mike Zimmer, a 28-11 loss at Indianapolis, and could find themselves out of the NFC Playoff picture before their Week 7 bye if they’re not careful.

The Minnesota Vikings are looking to snap their two-game losing streak as they prepare to face the Tennessee Titans this week.

That’s after Zimmer, Rick Spielman and Kirk Cousins got contract extensions to stay in Minnesota for two more seasons after 2020. The Vikings need a win Sunday against the Tennessee Titans, if nothing else than to feel good about themselves. But after an 0-2 start, their backs are against the wall the rest of the season if they plan to be in the playoffs. Teams that start 0-2 in a normal playoff scenario have about a 12 percent chance to make the post-season.

“All the time our backs are against the wall, but every week it’s like that. Unfortunately we have not played well enough to win and what we have to do is get back to being ourselves. Doing the things that we do good, eliminate the mistakes that we’re making,” Zimmer said. “My message to them has been before we start winning, we have to stop losing. Right now we’re losing because of the mistakes that we’re making.”

Cousins is coming off one of the worst games of his career as a starting quarterback. He was 11-of-16 for 113 yards, three interceptions and took a safety for the second straight game. Sunday, he said he needed to watch the tape to assess what went wrong.

It’s the same Cousins that not only won his first playoff game on the road as a starter last season, but was named the NFC Player of the Month in October after throwing 10 touchdowns and just two interceptions in four straight wins.

So how does he move forward?

“You just go back to your process and take it one day at a time and believe that over the long haul, good things will happen and you’re going to play better football more often than you’re not,” Cousins said.

With an 0-2 start, Danielle Hunter, Pat Elflein and Anthony Bar on injured reserve, a young secondary and an underperforming quarterback and offensive line, the time has already come to have a sense of urgency.

It’s not a new territory for Cousins.

One guy not used to losing is rookie receiver Justin Jefferson. The former LSU star helped lead the Tigers to a 15-0 season in 2019 and the national championship. Jefferson lost a total of seven games over three years at LSU.

Jefferson actually led the Vikings in receiving Sunday, though his catches came with the game decided. He’s finding out quickly how life in the NFL can be different.

“We need to find the energy and get this team back to where we need to be,” Jefferson said.

Linebacker Eric Wilson might have said it best Wednesday. They’re upset about the 0-2 start and say they’re a better team than that record shows.

The stats, unfortunately, tell another story. They gave up 364 yards, four touchdowns and more than 500 total yards to Aaron Rodgers two weeks ago. Sunday, they couldn’t contain Jonathan Taylor early and allowed 151 total rushing yards. Philip Rivers wasn’t flashy, but threw for 214 yards and made plays when he had to. The Colts had 24 first downs and possession for more than 38 minutes.

Quarterbacks aren’t getting pressured, the Vikings are committing penalties in key spots and a young secondary is getting targeted frequently. At some point, things have to change.

“That doesn’t mean that we don’t have the personnel to win, which we do. We have the coaching to win, it’s just a matter of us going out and not beating ourselves and not committing dumb penalties, not being misaligned, just making sure we do our job completely in and out. It’s there,” Wilson said.