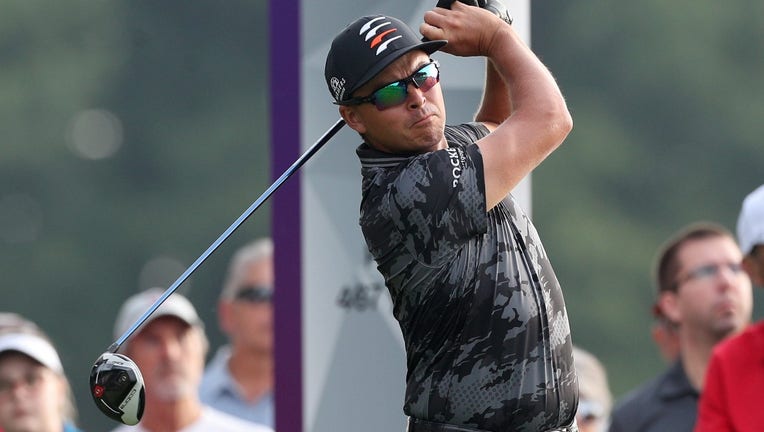 Rickie Fowler plays his shot from the 11th tee during the First Round of the 3M Open at TPC Twin Cities on July 22, 2021 in Blaine, Minnesota.  ((Photo by David Berding/Getty Images))

MINNEAPOLIS - The third annual 3M Open started bright and early Thursday morning with players off the front and back nine, and by early afternoon, there was already a mix of top names and unknowns at the top of the leaderboard.

Coming off a final round 65 at The Open Championship last weekend, Rickie Fowler is tied for the clubhouse lead after firing an opening round 7-under par 64 at TPC Twin Cities. Fowler needs a strong finish at the 3M Open this week to position himself for the FedEx Cup Playoffs without stress the rest of the PGA Tour season.

Rain caused some trouble for golfers and fans who stopped out for day 1 of the 3M Open at TPC Twin Cities in Blaine, Minnesota.

He’s currently 124th in the FedEx Cup Playoffs points, and the top 125 make it at the end of the season. Fowler went bogey-free and had three birdies on each side Thursday.

"I know where I'm at, what we need to do and stuff like that. Really just focusing on things we've been working on, playing more consistent good golf. More days like today and things will be fine," Fowler said.

Fowler, playing with Sergio Garcia and Tony Finau, had probably the biggest gallery of the morning groups as the tournament is back to full fan capacity after having no fans last year due to COVID-19.

He’s tied for the early lead with Spring Lake Park native Troy Merritt and Jhonattan Vegas. Merritt had a 6-under par 30 on the back nine for an opening round 64. He has about two decades of experience with TPC Twin Cities, between playing and coming to watch the previous Champions Tour event, the 3M Championship.

"It's just a lot of fun. It's great for the players, it's great for the fans, you can make a lot of birdies, the scoring's usually really low. So if you like shootouts, this is the golf course for you and you're going to get another one this week," Merritt said.

Vegas made seven birdies, including one on the finishing par-5 18th, and was bogey-free Thursday for his 64.

Players teeing off in the morning had to sit through weather delay of two-plus hours as storms rumbled across the Twin Cities metro late in the morning, which also pushed back afternoon starting times. The weather horn blew just before 11:30 a.m., and play resumed around 1:50 p.m. with Scott Stallings having one hole left and a chance to tie or set a course record.

Stallings was 8-under par heading to the par-5 18th, needing a birdie for 62. But he hit his approach shot from 234 yards in the water short of the green. He hit a second approach in the rough over the green, chunked a chip shot and finished with a double bogey seven. A birdie would’ve tied the course record. Instead, he’s one shot back of Fowler and Merritt after shooting 65.

He made nine birdies on the day, including a stretch of three straight and six in eight holes.

"It was nice to go out there and take advantage of the morning and put myself in position. Just like I did on 18, just mishit it, it kind of is what it is. Not going to let one bad shot kind of take away from how well I played," Stallings said. "Anytime you make nine birdies and walk away, you feel pretty good and look forward to tomorrow."

Former University of Minnesota golf star Angus Flanagan is at 1-over par after a 72 on Thursday. In other notables, Louis Oosthuizen shot 3-under 68, as did former Gopher Erik van Rooyen. Dustin Johnson and Sergio Garcia each shot 1-under 70, and Tony Finau and Bubba Watson each shot a 1-over 72.

Play was suspended due to darkness at about 9 p.m. First round action resumes at 8 a.m. Friday, with second round tee times on as previously scheduled.

The news of the morning out of Blaine came from Dustin Johnson, the No. 2-ranked player in the world. His brother and caddie, Austin, is not at the tournament after testing positive for COVID-19. Johnson said he’s doing fine, and has already been cleared to be back on the bag in three weeks at the World Golf Championships-FedEx St. Jude Classic in Memphis.