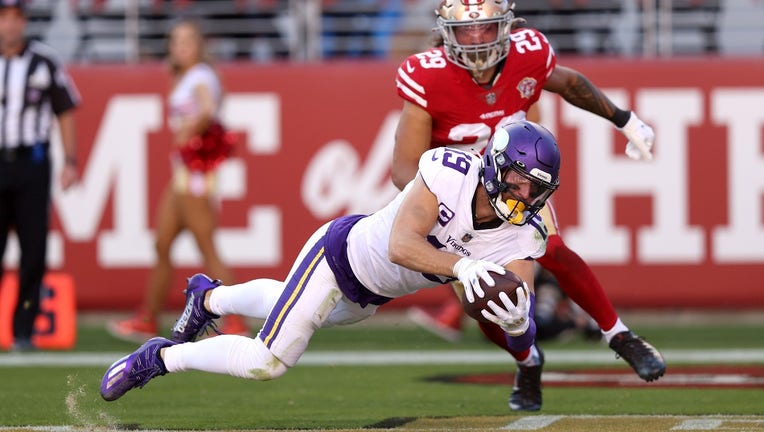 MINNEAPOLIS - The Minnesota Vikings continue to navigate NFL free agency with a thin margin for error against the salary cap, but the team got some relief from it on Friday and is bringing back a key veteran to the offense.

Wide receiver Adam Thielen, through his agency, announced Friday morning on social media he’s returning to the Vikings for the 2022 season on a restructured contract. Thielen will get a raise and reportedly make $14.4 million this season, including a $9 million roster bonus. He was originally set to make $16.8 million against the team’s salary cap, but the restructure lowers the cap hit by more than $4 million.

"What’s up Vikings fans? I just wanted to say I guess you can’t get rid of me yet. I’m super excited to be back in purple to ultimately try to bring a championship to this city that so much deserves it. So excited about the leadership and everything that’s being put in place in this organization. Can’t wait to get back to work and really build on something special," Thielen said through Team IFA.

Thielen started 13 games last season and finished with 67 catches on 95 targets for 726 yards and 10 touchdowns, which is the second-highest in his career. Thielen and Justin Jefferson tied for the team lead last year with 10 touchdowns each. The duo combined for 175 catches and 2,342 yards.

Thielen has 141 catches for 1,651 yards and 24 touchdowns the last two seasons. He has not played a full season since 2018, which was also his last 1,000-yard receiving year. Thielen remains under contract through the 2024 season.

The Vikings’ new leadership group has made it a priority to bring back select veterans for the 2022 season. They gave quarterback Kirk Cousins a one-year extension that cut $14 million against the salary cap, and restructured Harrison’s Smith deal.

One big question still looms on star defensive end Danielle Hunter, who is due an $18 million roster bonus on Sunday and is set to make more than $25 million against the cap in 2022, barring a restructure or trade. Hunter has played just eight games the last two seasons due to injury.