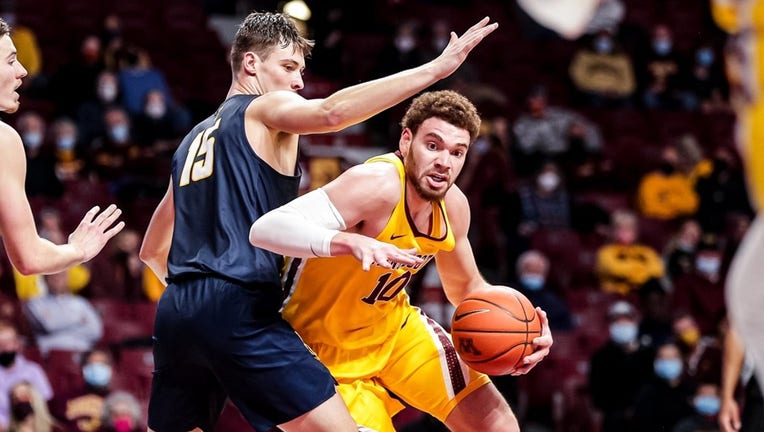 MINNEAPOLIS - A new era in University of Minnesota men’s basketball tips off Tuesday night as the Gophers host Missouri-Kansas City at Williams Arena.

Fans attending the game will want to keep their program handy. Nine players from last season’s 14-15 team left the program, and Ben Johnson was hired to replace Richard Pitino in late March. The Gophers feature as many as 10 new faces, and have just two players on the roster with experience playing in a Power Five conference.

Here’s five things to watch both Tuesday night, and the rest of the season.

Ben Johnson will step on the Williams Arena court for the first time officially as a head coach Tuesday night. He wore the Gophers’ jersey as a two-time captain, and has been an assistant coach at six different programs over 17 seasons, including five years as a Gophers’ assistant under Pitino, before being hired by Mark Coyle in late March.

He’s put in his time, and now gets his chance to lead a program he once played for.

Eric Curry and Payton Willis are the lone players on the 2021-22 roster who have experience playing a full season in a Power Five program. They were both named captains this week by their teammates. Curry, a redshirt senior, decided to return for one more year. He’s battled knee and foot injuries most of his career, and had his first fully-healthy season last year.

"We’re all playing for each other here. This is a new journey for all of us. We’re going to come out there and just play hard," Curry said.

Willis was with the program two years ago, then transferred to College of Charleston last year. He wanted to return for one more season after Johnson was hired, and Curry wanted to come back. He’ll be Minnesota’s lead guard this season.

Who will be the Gophers’ top players this season? We don’t have a lot to go off yet, between a scrimmage at Oklahoma and last week’s exhibition against Concordia-St. Paul. In that exhibition, Willis and Jamison battle combined to score 47 points on 17-of-30 shooting, including 7-of-15 from the perimeter. Look for Willis and Battle, a former DeLaSalle standout like Johnson, to be Minnesota's most consistent players this season. Curry, Luke Loewe and E.J. Stephens also started that game for the Gophers, and it could be a similar lineup against Kansas City.

HOW BIG AN ISSUE WILL REBOUNDIND BE?

The biggest concern for the Gophers coming out of the Concordia-St. Paul exhibition was rebounding. Minnesota was out-rebounded, 43-41, by a Division II program and gave up 15 offensive rebounds. That’s not a good sign as they get ready to embark on the physicality of the Big Ten. Rebounding is something to watch as the season starts. One encouraging sign as the Gophers forced Concordia into 20 turnovers, and held the Bears to 38 percent shooting.

Fans are going to need to exercise patience this season. Johnson needs time to build his foundation with the Gophers, and that’s what the first season is about. The Gophers will take their lumps along the way. They’re projected to finish last in the Big Ten this season. That’s after seven years under Pitino where they finished above .500 in league play just once.

It’s Johnson’s goal to change that narrative, but again, it will take time. The players are well aware of that projection, and they’re using it as motivation.

"We’re expecting to win, all the guys came here to win. We have chips on our shoulders, being voted last in the Big Ten definitely gives us a little extra juice," Willis said.