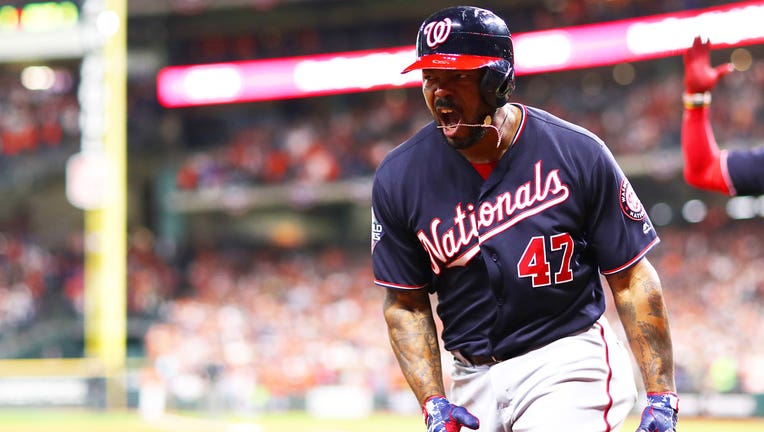 Howie Kendrick celebrates after hitting a two-run drive against Astros' Will Harris in the seventh inning of the final World Series game on Oct. 30, 2019, in Houston. (Photo by Mike Ehrmann/Getty Images)

With Mitch Garver, Josh Donaldson, and Byron Buxton injured, the Twins could use both punch and depth from the right side. Fortunately, there are a handful of solid players who might be available in trades before the deadline next Monday.

This trade deadline will be much quieter than most, and it’s hard to guess or gauge what kinds of deals will happen. Certainly, teams will approach the possibility of trading for players on expiring contracts differently than they would in other years, since this truncated season and the expanded playoffs change the payoff for a successful short-term upgrade. Clubs also figure to be a bit more wary to take on big contracts, because of the widespread uncertainty about the medium-term future of free agency and team finances. Still, moves will happen, and the Twins are a surefire playoff team with clear, low-grade needs. That could position them well to make a deal or two.

It’s not just the fact that Garver, Buxton, and Donaldson are sidelined right now that puts the Twins in a position of needing some extra right-handed hitting help. Ehire Adrianza, who was a pleasant surprise as a versatile bench option in 2018 and 2019, has faded, and now looks more like the poor hitter who first made his way to Minnesota. Adrianza is also aging, with his defensive prowess fading and his speed gone, so he offers little for the Twins at this point. Luis Arraez continues to play on a sore knee, and it’s affecting his game. Marwin Gonzalez has a .673 OPS.

The team should try to hedge their bets, in case some significant subset of this sextet remains unable to help the club much come October. Here are the three best guys who should be available and could fill key needs. We’ll discuss three more tomorrow.

Donovan Solano, IF, San Francisco Giants: Though some teammates have nicknamed him Donny Barrels, Solano doesn’t actually generate much power. That’s almost where the bad news ends, though, because Solano has become a genuinely interesting right-handed hitter, capable of squaring the ball up as consistently as anyone in baseball and of playing all over the infield.

Solano uses a toe tap/leg kick hybrid, so his swing sometimes looks a bit arrhythmic, but he makes contact within the zone and uses the whole field. He’s also one of the best players in baseball at clustering his batted balls within the launch-angle band that leads to the best outcomes. Among players with 100 or more batted balls in 2019, the Twins had the seventh-, ninth-, and 10th-best hitters at that, in Arraez, Jorge Polanco, and Jason Castro. Solano, however, was first, in a group that included 406 total players. He’s among the leaders thus far in 2020, too, which is part of the reason for his .340 batting average since the start of 2019.

At either second or third base, Solano is a roughly average fielder. He’s played shortstop for 150 innings over the last two seasons, too. He’s not a good baserunner, but Solano would be a massive upgrade over Adrianza and Gonzalez, pushing the former off the roster and letting the latter play more outfield as needed. He would even make a fine platoon partner for Arraez, and failing that, he would provide insurance against Arraez needing to sit for a prolonged period with that nagging knee problem. With the ability to use the whole field but a tendency to pull the ball, and with his emphasis on getting on plane with the incoming pitch so frequently, Solano’s a perfect fit for this team and its philosophy.

The only real drawback in dealing for Solano is that the Giants are in a position to ask for something meaningful in return. That doesn’t mean the Twins would need to part with any of their name-brand prospects, but Solano has a year of team control remaining beyond this year, so Minnesota would have to offer enough not only to outbid other interested teams, but to make Giants general manager Scott Harris and president of baseball operations Farhan Zaidi decide to pull the trigger now, rather than wait and see what offers they get over the winter.

Erik González, SS, Pittsburgh Pirates: Twins fans are familiar with González, who was an Indians farmhand and Francisco Lindor understudy until he was traded to Pittsburgh in November 2018. He’s long been considered a good-glove, no-hit shortstop, and fairly so. He’s not a match for the physical stereotype of such players, though: he’s tall and strong. That’s why what’s happening this year is pretty exciting.

González, who has just one home run in 2020 and seven in 497 career plate appearances, is among the league leaders in average exit velocity and in hard-hit rate this year. He’s even elevating the ball more. Nor is all of that happening by accident. He’s genuinely hammering the baseball, and it’s thanks to a new swing path.

González hits with a high, early leg kick, and in the past, that led to a somewhat lunging swing in which he swung down through the point of contact. Watching his swing, especially over the last two seasons, was oddly jarring: it’s a very familiar swing path to anyone who grew up watching baseball even in the 1990s or early 2000s, but there are few players left in the game who swing that way.

This year, the leg kick is the same, though he’s doing some different things with his back leg as he drives forward. He’s also creating more torque, by keeping his front shoulder closed and starting his bat barrel with a rearward movement to get his swing going. For the most part, though, he’s just changed that swing plane. He’s still not a fly-ball hitter, but he’s getting his hands down and creating a path up into the strike zone.

Plate discipline is far from a strength for González; he has 14 strikeouts and no walks this year. That’s not a bad strikeout rate, though, for a hitter who is generating plenty of potential power. González’s swing is fairly grooved, at this point, with a high in-zone contact rate but a lot of whiffs when he expands the zone. The Twins have taught precisely that style of hitting recently, though, so he’d be a good fit for them, philosophically.

More than Solano, González would be an option at shortstop even if Polanco were to get hurt, requiring a longer-term stopgap. He’s also a superior defender at second base. The Pirates have control over González through 2022, but they’re already trying to find playing time for Kevin Newman, Cole Tucker, and Adam Frazier, and infield prospects Ke’Bryan Hayes and Oneil Cruz are knocking on the door. That his surface-level production doesn’t yet match the change in the batted-ball data could help keep his price tag down. Pittsburgh desperately needs pitching help, and the Twins have enough depth in that area to get a deal done without feeling a major pang.

Howie Kendrick, 1B/2B, Washington Nationals: No serious baseball fan needs an introduction to Kendrick at this point. If his 15-year career hadn’t previously exposed you to him, his game-winning homer in Game 7 of last year’s World Series ought to have done so. Kendrick is the prototypical “professional hitter,” with far more pure hit tool than power, but enough of the latter to come through when that’s what the team needs.

At 37 years old, Kendrick is painfully slow afoot, and he hasn’t played a meaningful amount anywhere but first or second base in over half a decade. His lack of versatility would make him an imperfect replacement for Adrianza, and would limit his ability to help the team cope with Donaldson’s continued absence, but his bat is valuable all by itself. He’s exceptionally good at avoiding strikeouts. He uses the big part of the field, especially when he has an opportunity to move a runner over. He has good enough plate discipline to draw walks, especially because he’ll foul off good pitches on the edges of the zone if necessary.

When the Twins face a tough left-handed pitcher in a playoff setting, either as a starter or in a key late-game situation, it’d be awfully nice to have Kendrick available. He has a mutual option for 2021, which the bizarre market might actually bring into play, but the price tag to acquire him would be lower than those on either Solano or González.