ZUMBROTA, Minn. (FOX 9) - Over the last 150 years, it’s been everything from a beer hall to a wedding venue, but a local landmark in Zumbrota is also something else - the last functional covered bridge in Minnesota.

Nestled near the heart of Zumbrota, there's a bridge from the present to the past.

"A lot of people have very fond memories of walking across the bridge, being pulled across it in sleighs and it’s just a vibrant part of the community."

Over the last 150 years, it’s been everything from a beer hall to a wedding venue, but a local landmark in Zumbrota is also something else - the last functional covered bridge in Minnesota.

The covered bridge does more than just connect a park to downtown over the Zumbro River, it transports just about anyone who crosses it to a simpler time.

"If you look on the inside, there you've got six layers of timber coming together," explained Wayne Radke, chair of the Covered Bridge Task Force, a group that works to promote, protect and preserve the historic bridge.

"There’s a lot of stories about people who ignited romances here, had time with their girlfriends." Radke said.

Radke fell in love with the intricate architecture of the wooden structure after moving to town more than 25 years ago, where it has been a pillar of the community for more than 150 years.

"I think the bridge is a central icon to the town," Radke said. "A lot of people associate the covered bridge with Zumbrota… the two just kind of go together."

The bridge was originally built back in 1869 and was covered three years later to protect it from the elements. Pioneers from New England who settled in the area brought the trendy "town lattice truss design" with them because it was popular in other bridges back on the east coast.

"All the other ones had washed away that had been put there, and they needed a means to get into Zumbrota, so they had to build a better stronger one," said Alice Lother from the Zumbrota Historical Society. 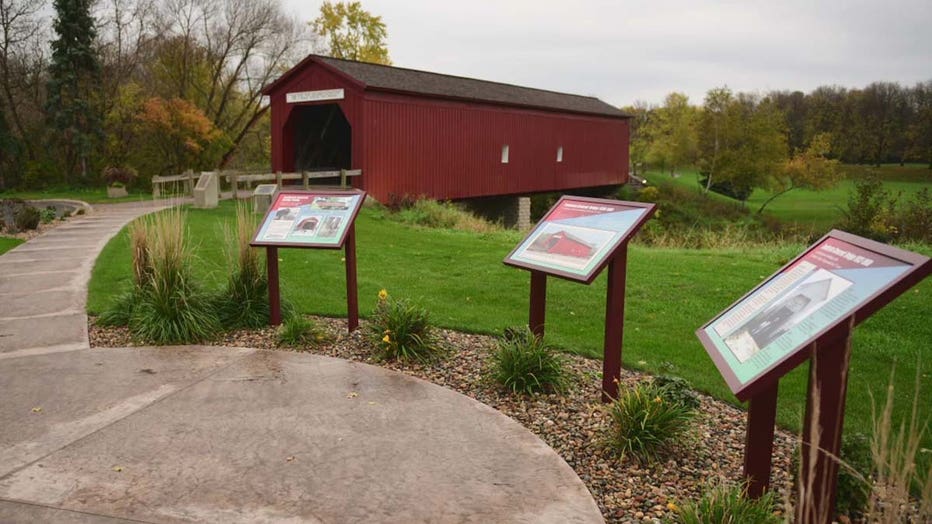 For more than half a century, the Zumbrota covered bridge carried horses, carts and eventually cars. But, MnDOT eventually decided to replace it because motor vehicle traffic was getting too heavy for the bridge to support.

Instead of demolishing the wooden structure, it was moved by horse to the Goodhue County fairgrounds where it served as an exhibition hall for the Izaak Walton League, a warehouse and even a beer garden for a couple of years.

"Isaac Walton used it for small animals during the fair for children to go and see," Lother said. "It had a bar the length of the bridge, which as 116 feet, so it was the longest bar in Goodhue County at that time."

By 1970, the townspeople began to recognize the bridge's historic significance and moved it to a park back in town, where it hosted weddings, parties and the annual covered bridge festival. But, frequent flooding threatened to damage it beyond repair, so they put it back over the river about 1,000 feet from where it originally sat.

"It’s a testimony to the good people of the city who wanted it preserved and cared for and kept. They just value it highly," Radke said.

Over the years, the bridge has become Zumbrota's main tourist attraction and it is on the National Register of Historic Places as the only timber truss covered bridge in Minnesota.

A winter storm caused the roof to collapse a couple of years ago, but construction crews used the original blueprints and 1860’s building techniques and materials to return the roof to its former glory.

These days, the bridge only carries pedestrians, but there are plenty of nods to days gone by, like the sign over the entryway that warns of a $10 fine for driving faster than a walk.

"You go through the bridge and see all the initials carved of ‘so and so loves so and so,’ and behind each of those is a wonderful story about some wonderful people," Radke said.

When it comes to keeping the bridge's history alive... this small town has got it covered.

"I’m sure hoping that after it’s been fixed up -- provided we don't get nailed by a tornado or even bigger storms -- she ought to be good for another 150," Radke said.