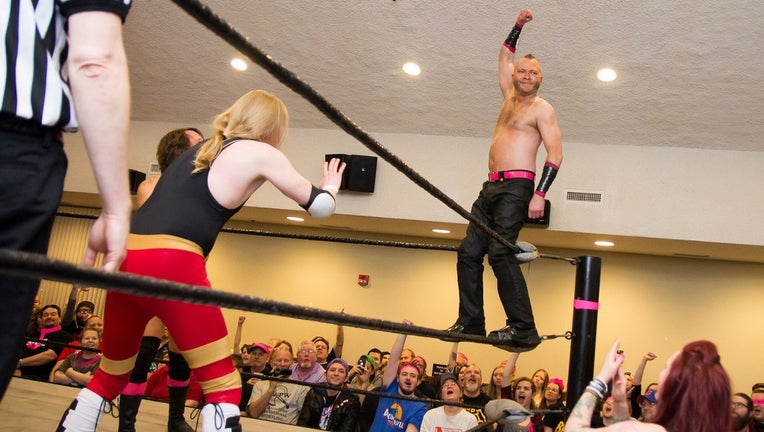 Playboy Pete Huge stands on a turnbuckle during a match, as the crowd cheers him on. (Supplied)

MINNEAPOLIS (FOX 9) - When Playboy Pete Huge said goodbye to wrestling in 2016, his legion of fans ate up every moment.

"Everybody knew who Playboy Pete was. Everyone had a good, fun story about Playboy Pete," fellow wrestler Chris Jordan said.

To mom and sister, Peter Houston was the youngest in the family, a giant, sentimental, loving teddy bear, who was found dead inside his South Minneapolis home, alone earlier this month. He was just 41 years old.

Jordan was Pete’s long-time tag team partner in the ring and close pal outside of it.

The duo often playing the role of villains throughout the Upper Midwest wrestling circuits, riling up the crowd wherever they went.

"He would go out to just entertain. That’s all he wanted to do, entertain whether it was a handful of people or thousands of people, he was going to give everything he had regardless," Jordan said.

Sadly, his loved ones believe the physical and sometimes dangerous demands of the sport took a toll on Pete over a nearly two-decade career that included multiple concussions, a traumatic brain injury and other painful scars.

To mom and sister, Peter Houston was the youngest in the family, a giant, sentimental, loving teddy bear, who was found dead inside his South Minneapolis home, alone earlier this month.

"The autopsy is still pending and it’s surreal. It feels like a week ago was a century ago… It’s not real," said Margaret Houston, Pete’s sister.

"He was just young, too young, he’s my baby. He was my baby," Bobby Houston said.

Pete's celebration of life will take place from 1 to 4 p.m. on October 10 at American Legion Chanhassen.