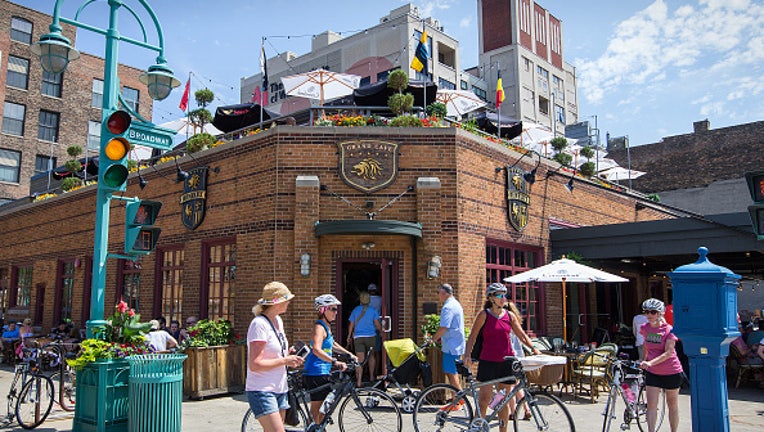 MILWAUKEE, WI, USA - Cafe Benelux Grand Cafe and Market with it's popular rooftop patio is part of the Milwaukee Public Market, a destination spot with shops, restaurants and bars, in The Third Ward. Milwaukee, Wisconsin, USA on July 10-20, 2017. (Gary Porter for the Washington Post / Getty Images)

MADISON, Wis. (AP) - Wisconsin Gov. Tony Evers ordered a statewide ban on all gatherings of more than 10 people as of 5 p.m. Tuesday, and closed all bars and restaurants, except for delivery and pickup orders, in an attempt to limit the spread of the coronavirus pandemic.

Evers also extended the closure of all public and private K-12 schools indefinitely and called on the Legislature to waive a one-week waiting period to receive unemployment compensation insurance. Evers said he would be talking with legislative leaders on Wednesday about an aid package.

The news comes as the number of people who tested positive for COVID-19 increased more than 50% in one day, from 47 to 72. There was community spread of the virus in Milwaukee, Dane and Kenosha counties, said Department of Health Services Secretary Andrea Palm.

The state health lab is now prioritizing who is tested because of a shortage in the supply of materials needed to complete the tests, said Dr. Westergaard, Wisconsin’s chief medical officer for communicable diseases.

Democratic Gov. Tony Evers and Republican legislative leaders, in a break from their normal partisan division, are working together on a legislative package to fight the coronavirus pandemic that has forced closures and unprecedented disruptions to daily life that could continue for months.

Up for discussion is what the state can do to mitigate losses to businesses, employees and everyone else affected by the virus, Evers and Republican Senate Majority Leader Scott Fitzgerald said on Tuesday.

“This is an all-out effort to make sure people in our state continue to thrive,” Evers said on WTMJ-AM.

Evers’ administration and Republicans who control the Legislature have been at odds on issues large and small since Evers took office last year. But the coronavirus, and the need for the state to react, appears to be bringing them together for now.

Fitzgerald told The Associated Press that he was working closely with Evers and Assembly Speaker Robin Vos on what could be done, but that he had no idea when the Senate may reconvene to take action. On Tuesday, Fitzgerald postponed indefinitely a planned meeting next week over concerns about the virus.

“This could be a two- or three-month deal before there’s stability in the markets and government has a handle, as well as the private sector, and figures out how much damage has been done by the slowdown,” Fitzgerald said.

Before the outbreak, the state was projected to have a $620 million budget surplus by the middle of next year. Fitzgerald said he didn’t know how much of that would not materialize now given the economic downturn and still be available for any state stimulus package, but he would be wary about committing too much at this point.

Fitzgerald said Evers and lawmakers were making a list of requests that state agencies may have that would require action by the Legislature. They are also waiting to see what action the state may have to take in reaction to whatever stimulus bill passes Congress.

For most people, the new coronavirus causes only mild or moderate symptoms, such as fever and cough. For some, especially older adults and people with existing health problems, it can cause more severe illness, including pneumonia.

The vast majority of people recover. According to the World Health Organization, people with mild illness recover in about two weeks, while those with more severe illness may take three to six weeks to recover.

The drive to stop the virus from spreading to the most vulnerable people and to not overwhelm health care systems with sick patients is pushing the urgent calls for people to avoid crowds or to just stay home.

Wisconsin had 47 confirmed cases of COVID-17 in 11 counties as of Monday. Health officials in Dane County, home to the state capital of Madison, said Tuesday it has 17 confirmed cases, up from 10 the day before, but that no one has been hospitalized. Public Health Madison and Dane County also confirmed there was community spread of the virus to people who had not recently traveled to areas with a higher concentration of cases.

Evers, 68, is a cancer survivor who lives in the governor’s mansion, which is located in a village surrounded by the city of Madison. He said he has not been tested for the virus, is showing no symptoms and that he hopes to not get tested because he’s concerned about the availability of tests for people who need them.

Also on Tuesday, Evers said “it was too early to make that judgment” on whether to postpone Wisconsin’s April 7 election, which includes the presidential primary, a state Supreme Court race and a host of other local contests. Evers said the emphasis remained on encouraging early voting.

There’s also no guarantee that the situation would be any different in June if the election were delayed until then, Evers said.

The Wisconsin Elections Commission scheduled an emergency meeting for Wednesday afternoon. Moving the election date would most likely require the Legislature to pass a bill, something that no one was currently advocating for, Fitzgerald said.

“I don’t see us making any changes right now,” he said.

Meanwhile, hospitals across the state were following federal guidance and canceling elective surgeries as they prepared for a potential influx of patients suffering from COVID-19.

Bars and restaurants in Milwaukee and 10 other Milwaukee County communities shut down early Tuesday morning — St. Patrick’s Day — to help stop the spread of the virus. That came a day after Evers banned any gatherings of more than 50 people, but allowed bars and restaurants to remain open for now.