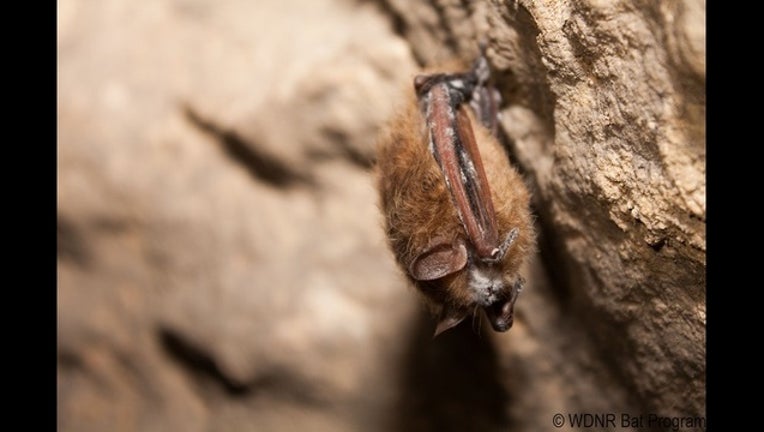 Courtesy of the Wisconsin Department of Natural Resources.

(KMSP) - A deadly bat disease has now spread to 24 counties in Wisconsin, according to the Department of Natural Resources, and has decreased populations in some areas by 30 to 100 percent.

White-nose syndrome has already killed more than seven million bats across the eastern United States and Canada. The disease is following a similar pattern in Wisconsin and Minnesota.

Minnesota had its first confirmed case of white-nose syndrome last year in St. Louis County. The disease has since been confirmed in six Minnesota counties.

Infected bats get a white fungal growth around their noses, ears and on their wings. The fungus causes bats to wake more often during hibernation, burning up critical stores of fat they need to survive winter. The disease is not harmful to people or other animals.

In Wisconsin, sites in their second or third year of infection are seeing bat population decreases of 30 to 100 percent. At two of the state’s largest sites, populations declined by 40 to 60 percent.

At a site in Grant County where the fungus was first discovered, DNR surveyors found only 16 bats, down from the 1,200 bats they recorded four seasons ago.

The DNR is now trying to find surviving bats to learn why they may have survived and understand if certain bats are genetically more resistant to the disease than others.

How you can help

The Wisconsin Department of Natural Resources says people can help surviving bats by building and installing bat houses and avoiding disturbing bat roosts between June 1 and Aug. 15, when bats raise their young and help to monitor bat populations.

The DNR is also asking people to report the buildings where bats are present in the summer as well as sites where bats are no longer showing up. Bats returning to summer roosts are likely survivors of white-nose syndrome.