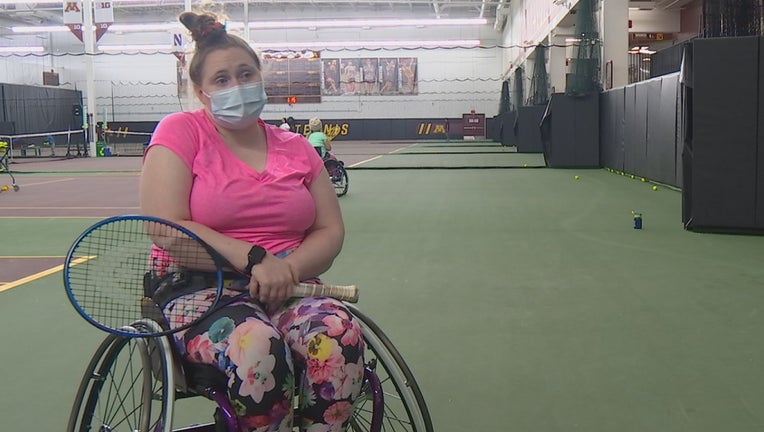 (FOX 9) - With a little yellow sphere, the language of "tennis" is one spoken around the globe.

It’s a worldwide game, but one program in Minnesota is truly giving everyone a chance on the court.

With a little yellow sphere, the language of "tennis" is one spoken around the globe.

The fast-paced sport is one of the quickest growing programs at Courage Kenny Rehab Institute. The group meets once a month at the University of Minnesota to bring tennis to anyone wanting to try.

"When you see the athletes learning a new sport, a new skill, and when it clicks, it’s exciting," Courage Kenny’s Beka Chapley said.

"[The program] is used to provide a lifetime sport that can be as competitive as you want it or as recreational."

All ages and experience levels are welcome to come out, with equipment provided during clinics this winter. Experienced players take part, along with people also wanting to give something new a try.

"Joining tennis was the first opportunity I had to do something," Becca Charpentier said of her experience playing the sport. "I never thought I would be doing something as active as tennis or as sporty."

The same rules apply to able-bodied tennis with one exception.

"If you’re in a wheelchair, you get two bounces (instead of one)," Charpentier said. "Other than that, it’s all the same."

All an attempt to get everyone on the same court no matter the situation.

"You don’t have to be in a chair to play with somebody who is in a chair," tennis coach Brendan Fitzpatrick said. "We’re just trying to get as many people as we can out here."

Courage Kenny Rehabilitation Institute is providing this program thanks to a grant from the US Tennis Association. If you would like more information about Courage Kenny’s adaptive programs, visit this link.