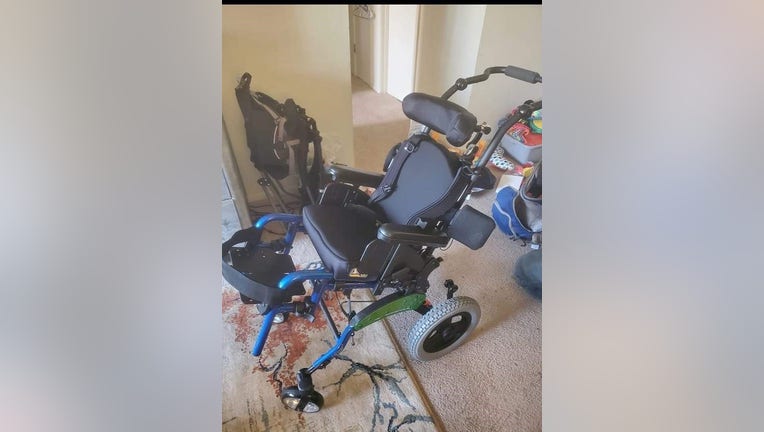 This custom wheelchair was stolen from a 2-year-old in West St. Paul with cerebral palsy. (West St. Paul Police/Twitter)

Thursday morning, West St. Paul Police put out an alert asking residents to be on the lookout for the custom wheelchair.

West St. Paul Police are looking for a wheelchair stolen from a 2-year-old with cerebral palsy.

Holly Magee’s son's customized wheelchair was taken overnight Tuesday from her vehicle in a parking lot on the 200 block of Thompson Street in West St. Paul.

It’s also a huge setback. Her son, Levi, was born with cerebral palsy.

“Without it we can’t go anywhere,” said Magee. “It’s hard, it means I physically have to carry him. He has no head support, no trunk support. He’s pretty much dead body weight.”

“I’m hoping that the individuals for the theft sees this, sees what we’re doing, sees how important this wheelchair is to the family and comes forward,” said West St. Paul Police Chief Brian Sturgeon.

Valued at more than $6,000, Magee says the wheelchair can take up to six months to replace. That’s time she and her son can't stand to lose.

“It looks like fun, you want to play with something in the car,” she said. “You want to take it and try it out, you don’t realize that that’s somebody’s life. Somebody legit needs that to go around and take care so that they can go on in life and you just literally wiped that away from my child.”