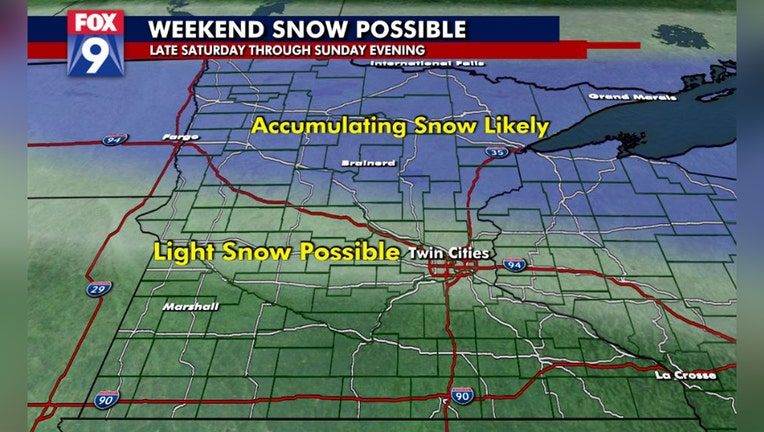 Weekend snow is possible in northern Minnesota, although the Twin Cities will likely get missed.  (FOX 9)

A band of snow will likely develop Saturday evening across western and central Minnesota that will quickly push north and encompass much of northern Minnesota Saturday night through Sunday. The Twin Cities will be on the far southern fringes of this moisture which could lead to some random snow bursts both Saturday evening, and then again occasionally on Sunday.

But, temperatures may be warm enough for even a few rain showers to mix in on Sunday if precipitation can get going in the Twin Cities, and there is a good possibility that it won't. So even if we get little coatings at times, with temperatures surging above freezing for a chunk of Sunday, accumulation will likely be minimal.

While the snow will mostly miss the Twin Cities, an occasional flake or drip could cause some slippery roadways as temps will be cooler overall, so just be advised when traveling around during the latter half of the weekend especially late Sunday and early Monday. Road conditions will be reasonable in the Twin Cities overall, but roadways in much of northern Minnesota will likely be snow covered, slippery and slow so plan accordingly.

Get the FOX 9 Weather App to track winter weather live on your phone, with future radar, school closings, livestreaming video of FOX 9 coverage and alerts and forecasts customized for your current location and favorite locations. Download it for Android or Apple.