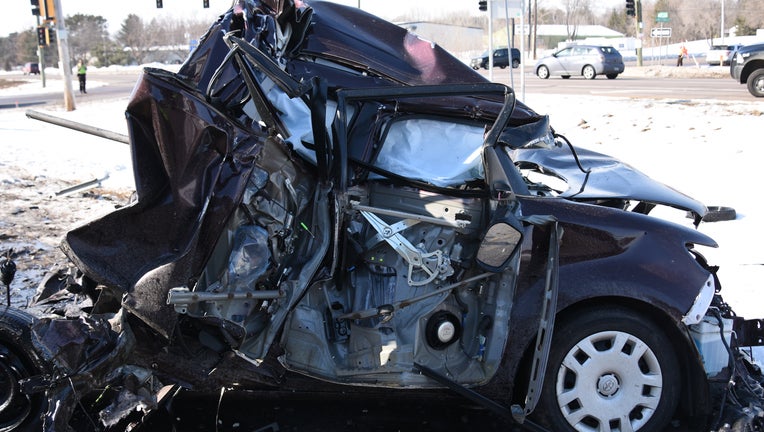 (FOX 9) - The Fox 9 Investigators found about one third of drivers in Minnesota who kill people with their vehicles end up spending a year or less behind bars.

Under state law, a conviction for criminal vehicular homicide carries a 10-year maximum prison sentence and a guideline sentence of four years for someone without a criminal record.

Violence on the road: Criminal vehicular homicide sentences ‘all over the map,’ but why?

The Fox 9 Investigators found about one third of drivers in Minnesota who kill people with their vehicles end up spending a year or less behind bars.

But the reasons judges and prosecutors deviate from guideline sentences vary greatly, as do the sentences themselves.

“Sick to my stomach”

Take the case of Samuel Hicks. In Feb 2018, the semi driver was traveling 63 mph down Highway 36 in Lake Elmo. A video camera on the dash of the big rig captured Hicks looking on his cell phone for eight seconds as he texted his girlfriend.

He smashed into a car stopped at a red light. Robert Bursik, 54, died at the scene, leaving behind his wife Jessica and three children, including a young son.

“There are days when you think he is going to come home and walk through the door,” Jessica Bursik told the Fox 9 Investigators. “It shattered my world, finding out was probably the most difficult memory I will have in my life.”

Bursik’s Toyota Scion was so severely damaged, the car had to be taken from the scene to extricate his body.

“I just kind of can't think about it anymore because it makes me sick to my stomach,” added his daughter, Jaci Davis.

Jessica thought the case was “a slam dunk.”

But just before his trial, Hicks cut a plea deal and a judge gave him only one year in the Washington County Jail.

The prosecutor told the Fox 9 Investigators, Hicks had a perfect driving record, no criminal history, and he was remorseful. In an email to the FOX 9 Investigators, the Washington County prosecutor wrote, “we looked at the overall benefit… and trying to prevent this from happening to other people.”

On the morning the Fox 9 Investigators interviewed Bursik’s family at their home in Amery, Wisonsin, they received more bad news. Under state law, Hicks will serve only two-thirds of his sentence, meaning he will be out by spring, spending just eight months in jail.

The Fox 9 Investigators compiled a database of every conviction in Minnesota for vehicular homicide for the last four years - 135 cases.

The sentences varied dramatically. Only eight got the statutory max of 10 years in prison.

The number of offenders who received the guideline sentence of four years was 32.

But 43, or about one-third of those sentenced, were given a year or less in jail.

84%, had one or more charges dropped or took a plea deal.

“Instead, it requires the driver was either legally drunk, or gross negligence, a relatively high legal standard,” he said.

Texting is not specifically mentioned in the law. So, judges must ask themselves if it’s really gross negligence, when it’s so common. Law enforcement officers cited 9,727 Minnesota drivers for distracted driving in just the last five months.

“I have always been a little uncomfortable with criminal vehicular homicide because you killed somebody and you are behind the wheel of a car and you drive in such a way that you kill someone. Forty-eight months is a little light in my book, but the Legislature sets it,” Freeman said.

Not every driver who kills someone is charged with criminal vehicular homicide.

Republican State Representative Bob Dettmer said he would like to close at least one loophole.

Eleven-year old Brooklyn Larson, died when a driver blew through a stop sign. But a deputy forgot to check a box on the citation, which allowed the driver to skip court and simply pay a fine for a petty misdemeanor.

Dettmer said the Fox 9 investigation shows there is a disconnect in terms of what society says about texting and driving and what prosecutors and judges do when offenders get to court.

“If you knew you were going to get 10 years, in an accident caused by your use of a cell phone, I think people would buckle down and stay away from that type of environment,” he said.

Some Families Ask for Leniency

Robert Bursik’s family feels like the line of gross negligence and intent is thin.

“It kind of seems like this is the wild west in the area of sentencing,” Jessica said.

Samuel Hicks declined to talk with Fox 9. But as part of his plea deal he will be telling his story to other truck drivers, and he will make a public service announcement with the Department of Public Safety on the dangers of distracted driving.

While Jessica didn’t feel she had a lot of input into Hicks’ sentence, the Fox 9 Investigators did find a handful of families who asked for leniency and it was taken into consideration at sentencing.