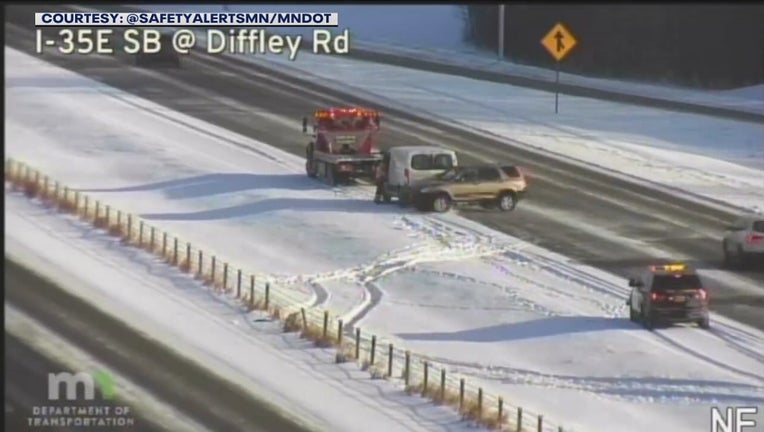 EAGAN, Minn. (FOX 9) - A tow truck driver working along I-35E in Eagan, Minnesota narrowly escaped serious injury when a vehicle slammed into a disabled vehicle over the weekend.

The tow truck driver had just pulled a white van out of the ditch near Diffley Road when the SUV lost control and slammed into the rear-end of the van.

A tow truck driver in Eagan, Minnesota faced some scary moments during wintry weather this weekend.

The tow truck driver, working for Dick's Valley Service, was knocked flat by the impact of the crash and just narrowly escaped being run over by the vehicles.

Thompson describes the call as the worst imaginable in his role. Fortunately, the 30-year-old tow truck driver only suffered minor bumps and bruises after a trip to the hospital. He is expected to be back at work by the end of the week.

Adding to the trauma, dispatch was on phone with him when the driver was hit.

Nealon is hoping the video of this near-tragedy gets other drivers to slow down and pay attention to the wintry road conditions.

In this case, the motorist was cited for a failure to drive with due care.