Twin Metals submitted its plan for an underground mine in the Superior National Forest to federal and state regulators, kicking off an environmental review process that the company concedes could last nearly a decade. &nbsp;

(FOX 9) - Twin Metals submitted its plan for an underground mine in the Superior National Forest to federal and state regulators, kicking off an environmental review process that the company concedes could last nearly a decade.

The proposed mine site is near Birch Lake and just five miles away from Boundary Waters Canoe Area (BWCA).

“Now we get to tell our story and we believe in our story,” said Twin Metals CEO Kelly Osborne.

He concedes that a mining project, by definition, is divisive.

“With a mining project people are not on the fence.  You are typically on one side or the other,” said Osborne.

The mining plan of operation was submitted to the Minnesota Department of Natural Resources (DNR) and the federal Bureau of Land Management (BLM). Details and renderings of the plan show a tunnel stretching a mile underground, before reaching a mine shaft that is between 400 to 4,500 feet below the surface. 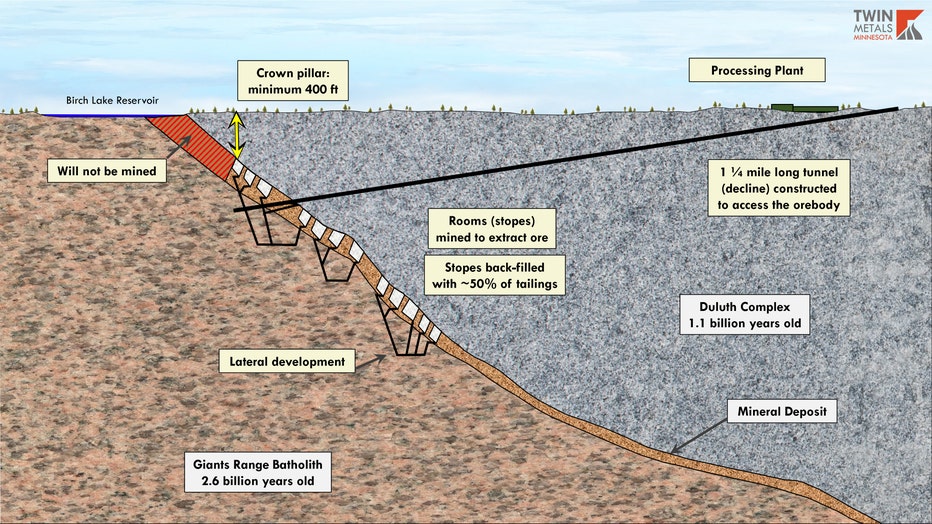 The shaft will include rooms, known as stopes, where copper, nickel, and platinum group metals are trapped inside sulphide rock. The company’s plan details how the metals will be crushed and extracted underground, before being processed at an above ground facility near the shores of Birch Lake.

“We’ll surgically remove the ore, so the waste material that will be left underground as pillars,” explained Osborne.  “We won’t have any waste tailings on the surface.”

Twin Metals has spent 10 years and $450 million to study the site, and said despite the abundance of water in the area, there is no ground water they can detect below 25 feet.

The company also claims it will be a “zero discharge” facility. 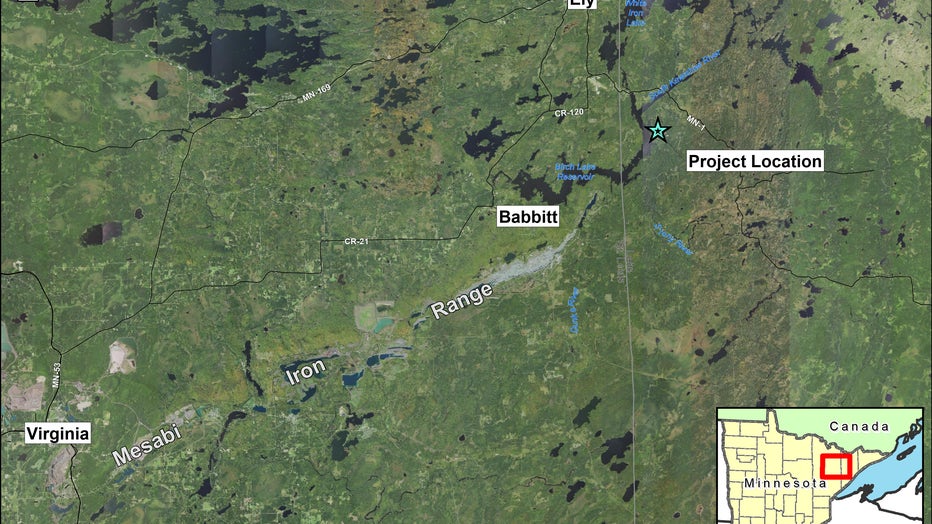 “They will be delivering a lump of coal before Christmas,” said Tom Landwehr, executive director of Save The Boundary Waters.

“It’s a water rich eco-system. All drainage from this goes into the BWCA and Voyage National Park,” said Landwehr, who is a former commissioner for the Minnesota DNR.

Landwehr said state regulations are inadequate for the project, because they don’t take into consideration the pristine nature of an area like the BWCA.  “The state is operating with one hand behind its back,” he said.

In 2017, the Trump Administration canceled a U.S. Forest Service study of proposed mining near the BWCA that concluded mining in the area posed an “unacceptable risk of irreparable harm.”

Congresswoman Betty McCollum (D-St. Paul) added a measure into the budget bill to continue the study of sulfide mining in the area.  But the measure was taken out of the budget bill by Congressman Pete Stauber (R-Duluth) had it removed, reportedly at the direction of the White House.

The Star Tribune last month published a lengthy editorial opposing the project, saying the environmental risk was too great.

“It was not just surprising, it was disappointing,” said Nancy Noor with Jobs for Minnesotans about the editorial. “I don’t see the Star Tribune as being a regulator.”

Noor represents a group of business and political leaders on the Iron Range that are supportive of the regulator process.

Twin Metals promises the mine would create 700 high wage minings jobs plus more than 1,400 spinoff jobs in the region.

“We know there’s going to be multiple administrations. We work with whoever’s out there. We believe in the process.”