(FOX 9) - We are now nearly three quarters of the way through what is typically the coldest month of the year on average, and we have yet to get below zero in the Twin Cities.

If we escape the month of January without a subzero temperature, it will be the first time since 2006 and just the third time on record, dating back to 1872. The current forecast has us staying at or above zero over the next seven days, but at least two of the next several nights will be a close call. 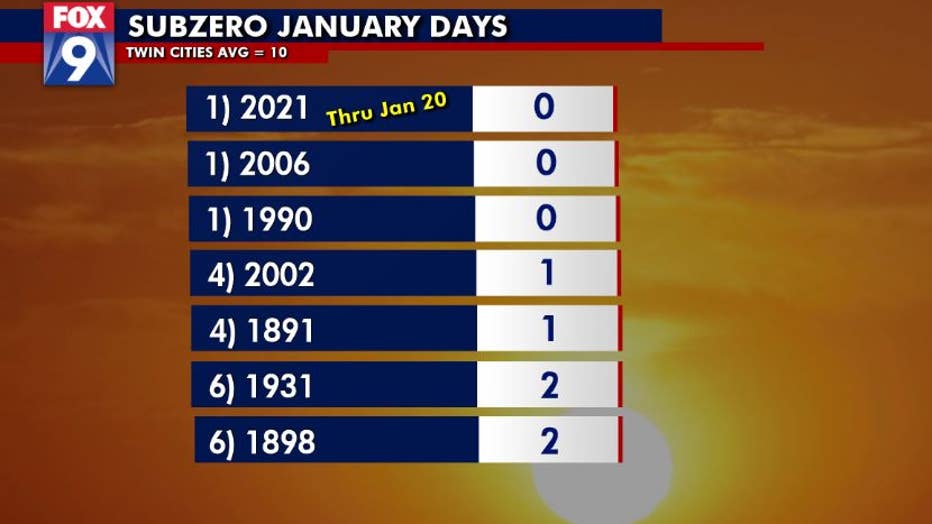 If the Twin Cities makes it through January without any subzero days, it would be just the third time since 1872 that has occurred. (FOX 9)

If history tells us anything, it’s unlikely we escape the month without at least one subzero temperature. But hypothetically speaking, even if we get one or two subzero lows, we’ll still be in the top ten fewest for the month of January. The Twin Cities averages 10 subzero low days in January.

The overall trend over the next few days, and potentially couple of weeks, is likely to be colder and closer to average, if not below average at times, because of a large pattern shift across North America. We have been so mild up to this point because the river of air at the top levels of the atmosphere has been split into two paths, much like a fork in the road. This allows the southern branch of that river, located over the southern U.S. to be more active, but unable to pull any arctic air southward because it is so far removed from the Pole.

Well, our jet stream is likely to form into one much stronger river over the next few days. As it ebbs and flows in the time that follows, it is likely to tap into true arctic air at times and pull some of it southward into the U.S.

Now, exactly when and to what extent remains to be seen, but it is likely to look and feel a little more wintry around here for at least a spell. We’ll see how long it lasts.