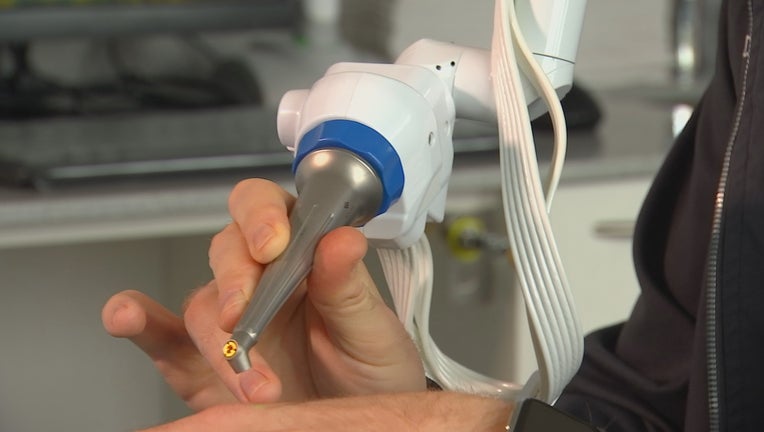 Some Twin Cities dentists are incorporating a new laser that gives a gentler experience to patients.

(FOX 9) - When it comes to going to the dentist, plenty of people have fears, mainly centered around pain and needles. But what if all of that could be eliminated?

Some new technology is becoming more popular within the metro, and it centers around a specialized laser.

When it comes to going to the dentist, plenty of people have fears, mainly centered around pain and needles. But what if all of that could be eliminated?&nbsp;

Using lasers in dental practice is nothing new, but up until about a year ago, those lasers could be used on soft tissue within the mouth or hard teeth - but not both.

For 9-year-old Reese Awend, getting her first cavity filled is no sweat, mainly because Dr. Bobbi Augustyn, owner of Camp Smile, could stand by her promise of no needles.

“The tooth structure, or the damaged tooth structure being removed is still occurring. It’s just a different process of going about it. The light energy from the laser ablates the tissue and then removes the decayed or cavity area, which creates the preparation you need in order for your filling material to then be placed,” Augustyn explained.

Camp Smile added the Solea laser more than a year ago to her Excelsior and Plymouth locations. Across the metro, Dr. David Knight added the new tool to his brand new Knight Pediatric Dentistry in Woodbury.

“I think this will be the standard of care in the next 5-10 years, especially for pediatric dentistry. Adults don’t like needles or shots any better, but they are just able to handle it,” Knight said.

Knight highlights the soft tissue uses as well, recently helping an 8-week-old patient release her tongue tie, which was preventing her from eating more than an ounce of milk at a time.

“We did it in the office with the laser. There was no anesthetic involved; it took about 20 seconds to do the procedure,” Knight said. “Without this option, it would have been scissors, or used a scalpel, which is not something I want to do on an 8-week-old.”

For the common cavity appointment, times are cut down from and hour to about 15 minutes.

“I wish I had this available to me when I was younger,” says Robyn Awend, Reese’s mom. “Nobody looks forward to needles and novocaine, but that has just been a reality with cavities. So, when we learned that wasn’t a part of this process, that was exciting because caring for our bodies is so important,” she said.

Currently there are four dentists offices across the metro that use the Solea laser. Augustyn adds there is no additional cost to patients, and these days, more of her patients go home smiling.

“One of my main goals as a pediatric provider is to change that stigma surrounding going to the dentist,” Augustyn said.