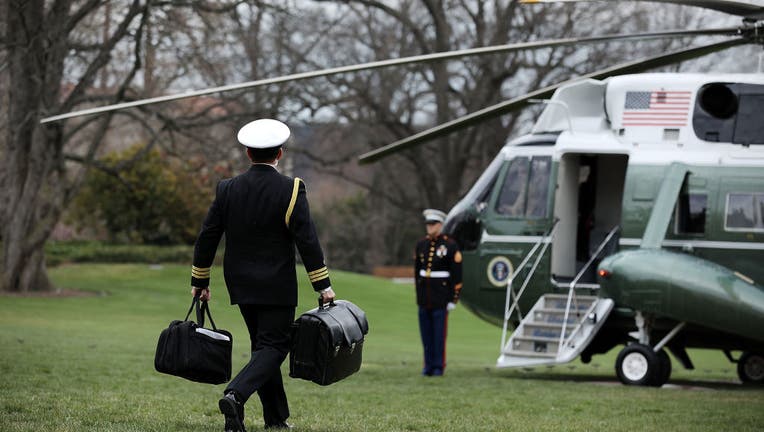 The federal government is adding a new page today to its nuclear playbook.

Because outgoing President Trump is breaking from tradition and will not be in Washington, D.C., for the inauguration of Joe Biden, the nuclear football -- the briefcase always in reach of the president that contains all the necessary materials to dial up a nuclear strike -- will have to be passed between both men through a long-distance handoff.

One of the nuclear footballs is heading to Florida this morning alongside Trump. The codes on the launch card associated with that briefcase are set to be deactivated at noon ET, as soon as Biden takes the oath of office in D.C.

Simultaneously, the launch codes on a card that Biden will have in his possession at the nation’s capital -- which is dubbed the "biscuit" -- will go active. A second nuclear football will be on-hand for him at the inauguration, carried by a military officer in close proximity, a U.S. official told NBC News.

The aide carrying Trump’s nuclear football will then make their way back to Washington, D.C., with that briefcase, reports say.

Normally the football would be handed off in-person from the departing president to his successor at the inauguration ceremony.

But Trump’s absence Wednesday will be the first time in more than a century and a half that an outgoing president won’t attend the event.

"President Trump’s decision not to attend the inaugural just puts an unneeded complication, and some more risk, into this process," Scott Sagan, a Stanford University professor who has written about nuclear weapons, told The New York Times.

Get more on this story from FOXNews.com.