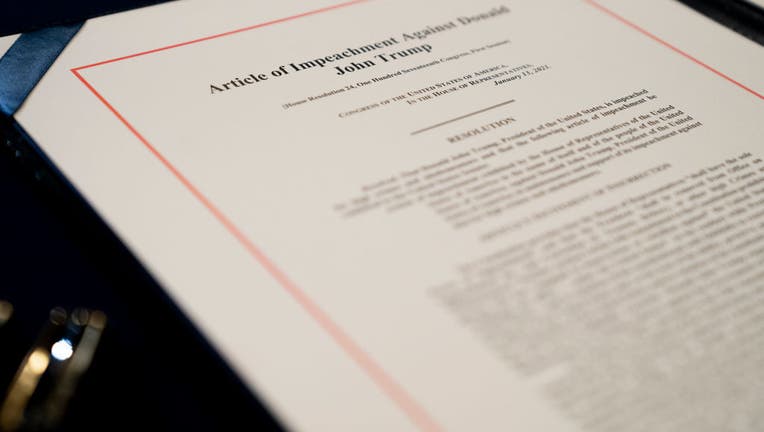 WASHINGTON, DC - JANUARY 13: An article of impeachment against President Donald Trump sits on a table at the U.S. Capitol on January 13, 2021 in Washington, DC. The House of Representatives voted to impeach Trump a second time, after Vice President M ((Photo by Stefani Reynolds/Getty Images) / Getty Images)

Unlike the president's first impeachment in December 2019, which had no Republican votes, 10 Republicans voted to impeach Trump this time. No Democrats voted against impeachment.

For the first time in history, a United States president has been impeached twice.

Trump was charged with willful incitement of insurrection in connection to the deadly riot that broke out at the Capitol a week ago, hours after Trump held a "Stop the Steal" rally, where he reiterated disproved claims regarding the election. The riot caused Congress to delay the certification of the electoral votes by several hours.

Democrats said they needed to act following the Capitol attack.

"Make no mistake, this was a terrorist plot to disrupt Congress and to prevent Congress from performing its duty under the U.S. Constitution to certify the results of the Electoral College," said McCollum in a statement. "For the safety of our nation, this president must be removed from office before he inflicts more damage to our democracy."

"With fewer than seven days remaining in this administration, we should be focused on moving forward and getting back to work on behalf of the American people," said Fischbach in a statement.

The vote happened in a Capitol that is suddenly under heavy protection from National Guard soldiers.

"No, I don’t feel safe," Phillips told reporters. "Not at all. I don’t think there’s a member of Congress that would say they do, but I’m focusing more on the resolution to do our jobs."

The House vote sets the stage for a Senate trial, which will not start until after President-elect Joe Biden and the Democrats take operational control of the Senate. While Trump will already be out of office, at stake is whether he will be able to hold office again.