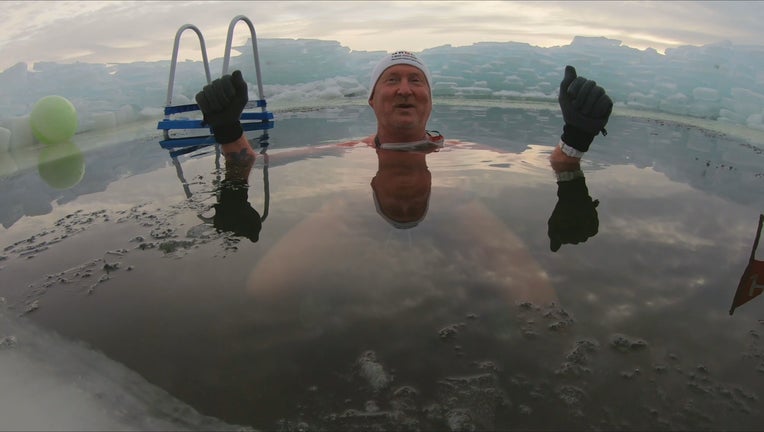 A hearty Minnesotan takes an icy dip into Lake Harriet, which is a daily ritual for a group that calls themselves "The Submergents."

MINNEAPOLIS (FOX 9) - A Twin Cities group called The Submergents takes a daily dip in a local lake for a jolt to get themselves going.

There’s something about winter in Minnesota that makes people go a little nuts. Maybe it’s the pandemic or cabin fever. Whatever it is, it appears to be gaining momentum.

A group of brave Minnesotans that call themselves The Submergents organized a daily dip into an icy Minneapolis lake.

Every morning, a group of hearty Minnesotans begin their day with a dip in the icy waters of Lake Harriet. They call themselves The Submergents, because they submerge their bodies below the water line.

On any given day, as many as 40 of them brave the frigid temperatures of the frozen lake for anywhere from three to 10 minutes.

The idea, they say, is to have a fun way for people to get outdoors during Minnesota’s long winters and get some fellowship and friendship in the process.

Steve Jewell says the group started when a couple of neighbors saw a man walk out and sit in the lake in late November. When they asked what he was doing, he told them about the benefits of controlled breathing in cold water. The next day, they decided to give it a try.

"The reality was we thought it was really fun. This was just after Thanksgiving and we’ve been coming every day since," said Jewell.

Since then, their group has grown through word of mouth to include friends, neighbors and event total strangers looking to embrace Old Man Winter.

When the lake froze over, one of The Submergents even cut an 11x11-foot hole in the ice so their bone chilling, teeth chattering adventures could continue.

Regulars tout the physical advantages of immersing their bodies in the intense cold for a short period of time. They say it has also improved their mental approach to dealing with what can feel like the longest season of the year.

The group normally meets at 7:55 a.m., but some Submergents also go in around noon and just before sunset.