Bar a total loss after fire in St. Cloud, Minnesota

A well-known bar is a total loss after a fire broke out Monday in St. Cloud, Minnesota.

The first was first reported at the Press Bar and Parlor at 2:40 a.m. St. Cloud Fire Chief Jerry Raymond said the fire started in the basement of the building, but because of the way the building was constructed some 100 years ago, it quickly jumped into the walls and up through the attic.

The Press Bar, a popular establishment in downtown St. Cloud, Minnesota, is likely a total loss after a fire early Monday morning. 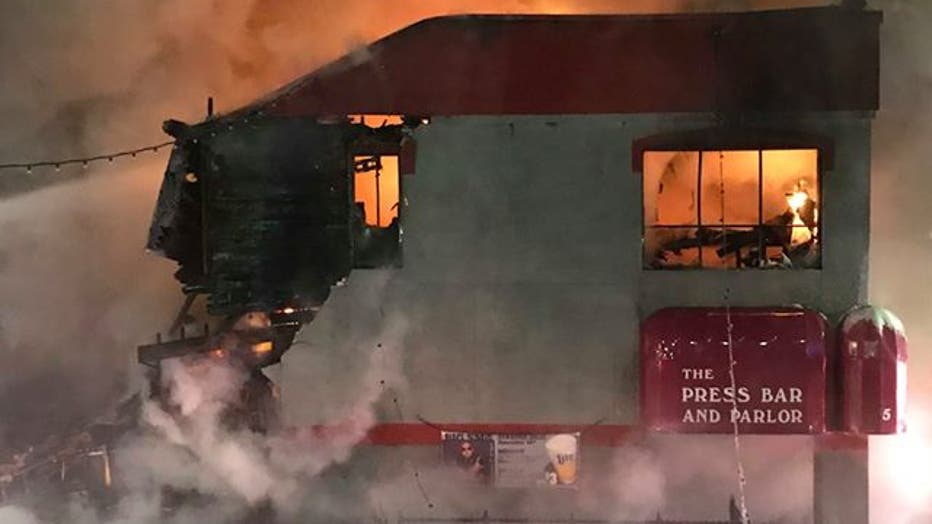 The Press Bar, a popular bar in downtown St. Cloud, Minnesota, is likely a total loss after an early morning fire. (FOX 9)

Firefighters had to fight the fire defensively from the outside because it was too hot to enter the building when they arrived.

“It was so hot and so smoky,” Raymond said. “Our crews couldn’t see beyond the reach of their hand.”

The fire was still smoldering nearly 12 hours after it started. Crews had to start demolishing the building so they could get to the fire and finally extinguish it.

Drone video shows the damage caused by a fire at the Press Bar in downtown St. Cloud, Minn.

“It has a lot of void spaces and empty spaces, so the fire gets in there and travels all over,” Raymond said. “The only way we can get to it is by tearing the walls down, tearing the ceilings down [and] getting to the walls.”

By 2 p.m., demolition crews were taking down the last of the walls, while making sure to save the building next door, which housed Cowboy Jack’s and some upstairs apartment units.

Crews demolished The Press Bar to finally extinguish the fire that had been burning since early Monday morning.

Isabelle Reischl, a bartender at The Press Bar, came rushing to the scene as soon as word of the fire spread.

“It was really hard to believe,” she said. “I was like, what? It can’t happen that way.”

No one was injured. The cause of the fire remains under investigation.

The owners of The Press Bar kept watch on the fire and subsequent demolition from across the street, but told FOX 9 they were not ready to talk about what comes next.

They issued the following statement on the bar’s Facebook page:

We would like to thank our St. Cloud Fire Department, St. Cloud Police department and all other first responders who assisted with the devastating fire that broke out at The Press Bar early this morning. We are thankful that no one was in the building at the time of the fire. We’ve gained many great employees, friends and memories there over the years. We appreciate your thoughts and prayers.