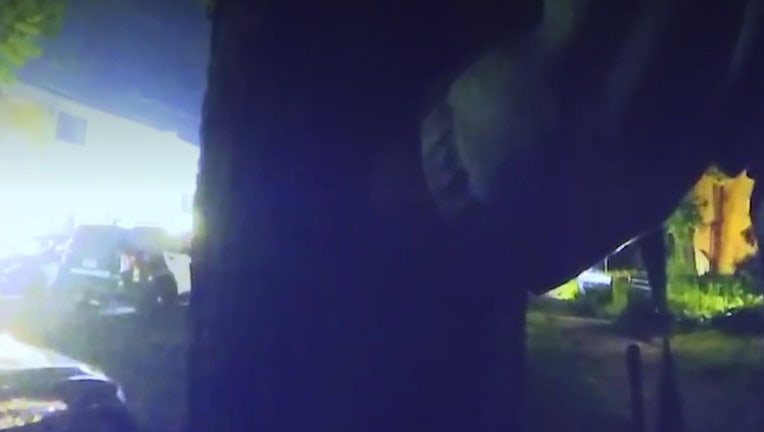 A screengrab from bodycam cam footage of the police shooting of Tekle Sundberg released by the City of Minneapolis on Wednesday.  (FOX 9)

MINNEAPOLIS (FOX 9) - A witness who was at the scene of Tekle Sundberg's standoff with police says he heard an officer tell Sundberg "drop it" and "hands up" before he then heard the two gunshots that authorities say were fired by police snipers who thought they saw Sundberg holding a gun.

North Minneapolis resident Lee Axelberg, 50, was one of several people live-streaming the standoff on the Citizen App. The video he published, under the username CitizenUser277804007, establishes that he was at the scene until roughly 4:15 a.m, about 15 minutes before the officers Pearson and Seraphine fired the fatal shots.

Axelberg, a former paramedic who now works as a handyman doing odd jobs, says he ended his stream to charge his phone, but he was still by the police perimeter on 20th Avenue when the shooting occurred, standing somewhere between the Taco Bell and Minneapolis Fire Station 7.

Officer bodycam footage of the shooting released by the city today did not capture officers saying anything to Sundberg before he was shot, and FOX 9 has not been able to interview other witnesses who could corroborate Axelberg’s account.

Axelberg has seen the bodycam footage, and he is confident as to what he remembers.

He says he then heard the gunshots, though, at the time, he says he wasn’t certain if was a gunshot followed by an echo or two shots.

Pressed as to if he was certain he heard the words "drop it," Axelberg replied: "Yes, absolutely sure I heard that."

In the body cam footage, officers Pearson and Seraphine are said to be positioned on the rooftop across from the apartment monitoring Tekle Sundberg's movements when they can be heard saying, "Is that a cellphone?" Before "gun?" and "gun" can be heard prior to shots fired.

New body camera video released on Wednesday shows the moments that Minneapolis police snipers fired shots, killing Tekle Sundberg. In the video, you are unable to see what police are looking at, but you can hear officers saying there is a gun before shooting.

Both officers shift direction immediately before the first shot is fired, with the officer wearing the body cam bringing a pair of binoculars up to his eyes. It is not clear from the video what the officers saw to cause them to react.

After the two shots, the officer with the binoculars (the one wearing the body cam)  seems to say, "He took out a gun" and "He had a gun." The audio is faint at that point, making challenging to be absolutely certain as to the exact wording of what the officer said.