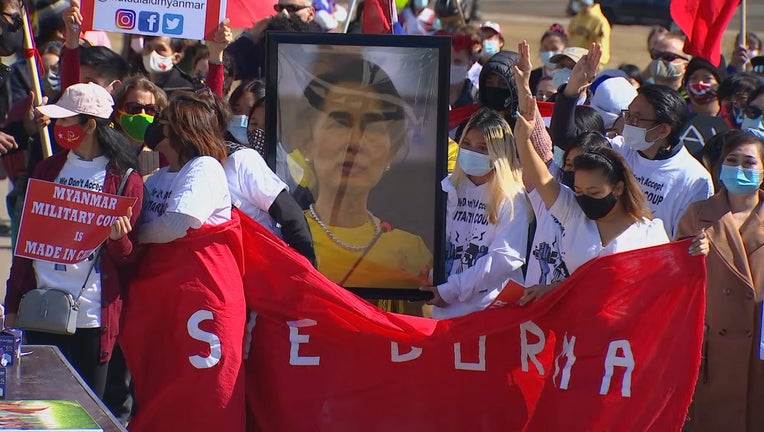 A large group of protesters gathered Saturday at the Minnesota State Capitol. (FOX 9)

ST. PAUL, Minn. (FOX 9) - A group of teens and young adults from the Twin Cities marched to the state capitol for a rally on Saturday against the coup in Myanmar.

The rally, organized by people of multiple ethnic groups that make up Myanmar, is calling for international action following the military coup.

A group of teens and young adults from the Twin Cities marched to the state capitol for a rally on Saturday against the coup in Myanmar.

In February, members of the country's military seized power for the elected party. This past week, seven protesters were killed when military forces opened fire. Since the occupation, nearly a hundred people have been killed in Myanmar.

In St. Paul, the group of protesters called for support from the U.S. government and justice for the people of Myanmar.

"You know these statements or strong contemplations don't stop the bloodshed in Burma," said protester Myo Nyut. "We have to take something, concrete action, result in action, otherwise we will lose every day the life of the young people who are the future of Burma."

Protesters say they hope their message will get through to lawmakers and help can be sent to those in Burma before it's too late.

Minnesota is home to thousands of refugees from Myanmar.