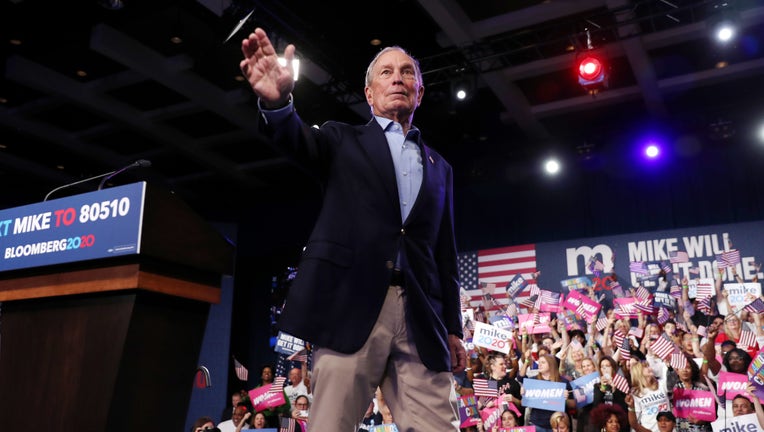 Biden won ten of the 14 states, adding to his total when Maine was called Wednesday afternoon. Biden pulled off a surprise victory in Minnesota after late-deciding voters largely broke his way after home-state candidate Amy Klobuchar dropped out of the running.

Democratic presidential candidate Mike Bloomberg dropped out and Elizabeth Warren began reassessing her candidacy Wednesday after rivals Joe Biden and Bernie Sanders swept all of the Super Tuesday states to consolidate the 2020 race.

Sanders won the other four states -- including the night’s biggest prize, California. The consequential evening gave Biden a 566-501 delegate lead, but Sanders said the two were “neck and neck” and forecasted a lengthy battle for the nomination.

Meanwhile, Bloomberg spiked his campaign after spending at least $560 million on television and radio ads and winning just 53 delegates, a cost of more than $10 million per delegate won.

Meanwhile, Warren said she was reevaluating her candidacy after failing to finish better than third place in any of the first 18 contests.

In Minnesota, Biden’s win was unlikely just three days before the primary. The race was seen as a toss-up between Klobuchar and Sanders, with the latter holding a rally in St. Paul on Monday night.

Then, Klobuchar dropped out and endorsed the former vice president. Some Klobuchar supporters interviewed by FOX 9 on Tuesday said they were already shopping for a new candidate because of Klobuchar’s struggles to gain traction in the race.

“She didn't have a chance to win and it would have been like throwing our vote away,” said Larry Nelson of Fridley, who said he and his wife Rita had been Klobuchar supporters who switched to Biden. “Then she withdrew and made our decision for us.”

Biden won 76 of Minnesota’s 87 counties despite investing little in the state and never campaigning here. He battled Sanders to a draw in the cities, won the suburbs convincingly, and often beat Sanders by a 2-to-1 margin in rural counties. Sanders won four Minnesota counties, and Klobuchar carried the most votes in the other seven counties.

Hamline University political science professor David Schultz said Klobuchar faced a risk of losing Minnesota if she had continued in the race. Endorsing Biden had its risks too, he said.

“She took a pretty big gamble stepping out of the race and endorsing Joe Biden, and telling her supporters, ‘Go support him,’” Schultz said. “Had they not delivered, it would’ve been an embarrassment. She pulled it off though.”

“She will no longer seek nomination or election to the office of President of the United States, and has ceased to conduct campaign activities with respect to the aforementioned election,” Clark wrote.

Klobuchar campaign manager Justin Buoen said Klobuchar will hit the campaign trail for Biden in the coming days. He didn’t say where she would campaign, but Michigan’s primary on Tuesday would be a possible option.

The campaign plans will fuel running mate speculation, but Schultz said Klobuchar might make an unlikely choice. For one, she struggled mightily to attract black and Latino voters that are key to the Democratic base. Klobuchar also failed to excite the party’s liberal wing.

Asked if Klobuchar would win Biden new votes, Schultz said, “I don’t see that at all at this point. Minnesota may be the exception here, in terms of the ability of her to deliver Minnesota.”