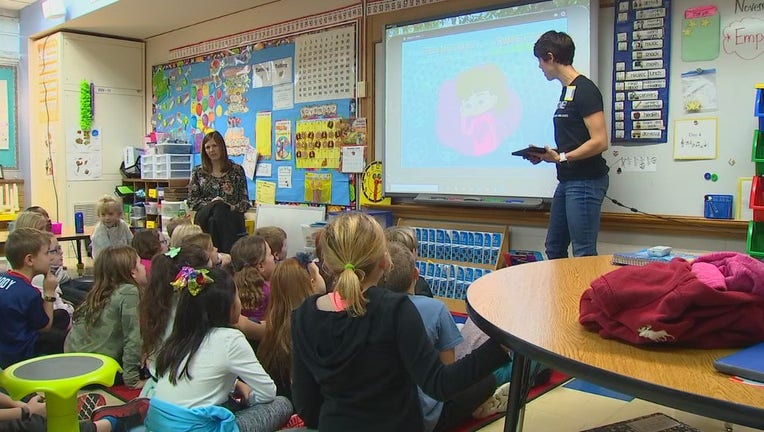 MINNETONKA, Minn. (FOX 9) - Some elementary school students are getting a lesson in how to prevent physical and sexual assaults by being their own hero.

It’s being considered just as important as a lesson on "stop, drop and roll" for children as young as preschool and kindergarten.

Some elementary school students are getting a lesson in how to prevent physical and sexual assaults by being their own hero.

The lesson in a Minnetonka classroom Tuesday was about keeping a group of second graders at Clear Springs Elementary School protected from a villain who is all too real.

“One in five kids will experience a sexual assault or abuse before they’re 18 years old,” said Heidi Nauman, of Super Hero Kids Foundation.

The statistics are sobering, but the Super Hero Kids Foundation believes they can be prevented through education.

“There’s two rules. There’s the feelings rule, which is no actions from others that make you uncomfortable, and the swimsuit rule, which means there are no secrets about swimsuit areas,” Nauman said.

The program, developed by a former Navy Seal officer from Eden Prairie, has been in place for several years.

“We believe and have been told by some health leaders that the ‘getaway and tell,’ which is the next theme of the younger kids program, is the next ‘stop, drop and roll,’” Nauman added.

Minnetonka Schools piloted the first program three years ago in their elementary schools. They haven’t looked back.

“It’s real and we’re not afraid to go after things that are real,” said Curt Carptenter, principal of Clear Springs Elementary. “We’ll do whatever it takes to protect our kids.”

Parents in Minnetonka support what their kids are learning.

“Education is key to prevention and prevention is what we need,” said Kenna Dick, a mom.

Dick, also a detective, has worked to get Super Hero kids into Edina, where she investigates sexual assaults against children.

The Rotary Club of Edina is also stepping up and funding a pilot program in the elementary schools there, hoping to spread superhero powers in that district, too.

“Starting at the beginning with a prevention program that is strong is really important,” said Bonnie Rolstad, of the Edina Rotary.

There are other age-appropriate programs on these same subjects being taught in middle schools and high schools by the Super Hero Kids Foundation. The plan is to grow this throughout other districts in the Twin Cities metro area.