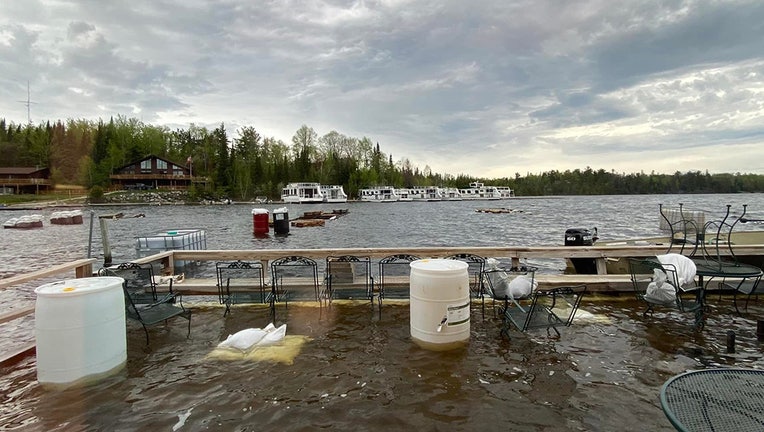 (FOX 9) - The storm system sweeping through Minnesota Monday has led to delays in sandbagging operations in parts of northern Minnesota, where floodwaters are expected to rise for the next several days.

Koochiching County halted its sandbagging effort due to lightning.

"While it is frustrating to have to cease sandbag operations, life safety and preservation of resources to be able to continually respond to the flooding in the days to come is paramount," said Koochiching County Sheriff Perryn Hedlund in a press release.

The flooding in northern Minnesota's Rainy Lake basin is expected to worsen in the coming days. The Duluth office of the National Weather Service is forecasting two to five inches of water rise in the area through June 3, according to hydrologist Steve Gohde.

"On the ground, it's widespread flooding. The situation by all those lakes is becoming more and more challenging for residents," Gohde said.

Gohde said he expects Namakan Lake to rise throughout the week and surpass the record it hit in 1916. On May 27, Rainy Lake hit 1,111.7 feet, which is eight inches above its peak in 2014, according to Gohde.

On May 20, Gov. Tim Walz authorized the Minnesota National Guard to support flood response in Koochiching County and St. Louis Country. Since then, 45 soldiers from the Duluth-based 1st Battalion, 94th Cavalry Regiment have been assisting in the sandbagging effort.

On Sunday, more than 30,400 sandbags were distributed in Koochiching County, according to the sheriff's office.  Several roads were also closed: County Road 117 (also known as Birch Point Rd), UT 446, and UT 269. Residents impacted by the high water have been asked to evacuate.

"Homes are in a dire situation. There's a lot of water out there, and it's hard to hold it back with sandbags. The water seeps around the bags. It's just a pretty tough fight for folks out there right now," Gohde said.