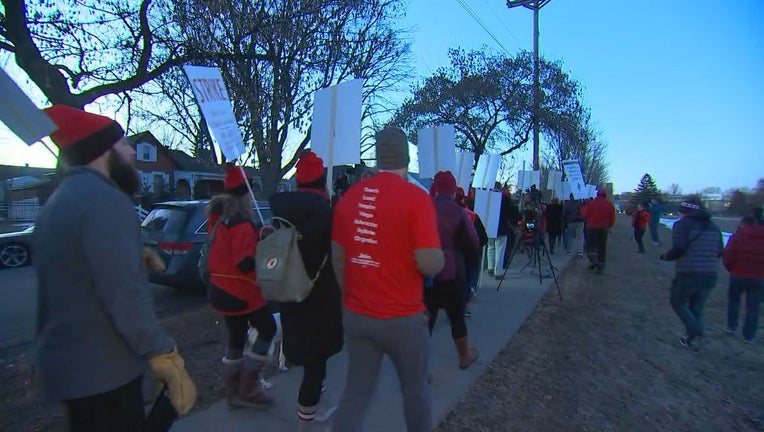 ST. PAUL, Minn. (FOX 9) - The St. Paul, Minnesota teachers union and the school district will return to the bargaining table Thursday as the teachers strike enters its third day.

More than 3,000 teachers and other school staff walked off the job Tuesday for the first time in more than 70 years after the union and the school district failed to agree on a new two-year contract. While the school district and the union reached a compromise on some issues, they have not been able to agree on increases in mental health, multilingual and special education funding.

As the St. Paul teachers strike continues, sites for children are opening at some of the schools.

“I’m teaching English to students who don’t speak English at home," said Hardy. "They don’t have someone to read to them. So to have someone at school that speaks their language. It is so powerful.”

The strike has forced schools to close for roughly 37,000 students, but starting Thursday, parents now have some new to options for what to do with their kids if they have to go to work.

St. Paul Public Schools has opened seven Kid Space sites for students in grades K-5. Kid Space will be a safe, supervised place for kids to go where they will get breakfast and lunch.

At Highland Park Elementary School about 160 children went to the site, where teaching assistants supervised the kids. Rules prohibit any pure academic instruction during the strike. The children appeared happy rotating between the activities.

The district is offering some bus service to transport students to the Kid Space sites, although only at specific pickup locations.

"We’ve got an art room, we have a dance room," said Ryan Fell, a program manager. "We have the gym where they are doing structured games, board games, and an inquiry space with LEGOs."

The Kid Space sites will be open from 8:30 a.m. to 3:00 p.m. while the strike continues. The school district says it should be able to serve about 4,000 kids, so parents are being asked to pre-register because some of the sites could fill up.

The following locations will be open as Kid Space sites:

In addition to the Kid Spaces, 24 schools will continue to serve breakfast and lunch for all students, but no transportation is being provided to those locations.

MORE: Where kids can go during the St. Paul teachers strike

Classes have been canceled for Friday due to the strike.