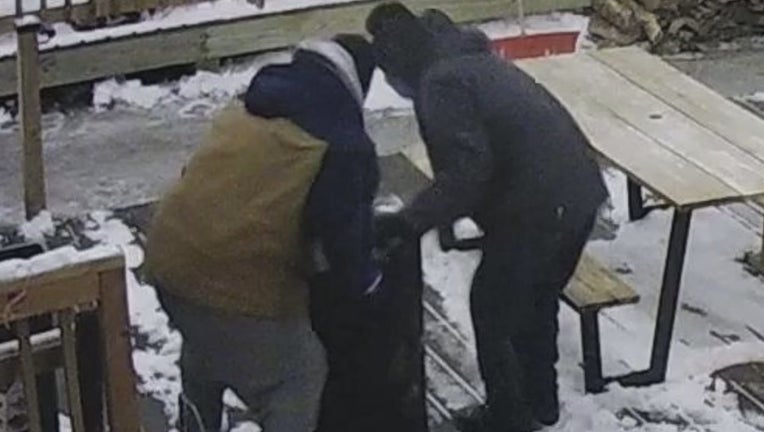 Thieves in St. Paul take a safe from The Gnome restaurant.

ST. PAUL, Minn. (FOX 9) - A St. Paul business owner called out city leaders after five robberies at his restaurants over the past few months, the most recent of which happened Sunday at The Gnome.

A St. Paul business owner called out city leaders after five robberies at his restaurants over the past few months, the most recent of which happened Sunday at The Gnome.

"We have 21 cameras in here and alarms going off," said Ingram. "That’s what’s scary. They’re not afraid of that stuff anymore."

Ingram said it took police 24 minutes to get to his business, but he doesn’t blame them for the slow response. Instead, he blames city leaders.

In a video shared widely on social media Sunday, Ingram begs city leaders to do something about what he says is an uptick in crime.

"This is insanity that our businesses are being robbed daily," he said. "Where are you elected officials? What are you doing? It’s time for you to step up and step out."

Sunday’s incident was the third robbery at the restaurant in the last 10 days, including a car jacking where a couple was victimized while leaving the restaurant.

"Right now, it seems like in our city, it’s carte blanc to do what you want if you’re a criminal. You know we don’t have enough police officers, and if they’re not going to show up for 30 minutes and you can get out in five, what’s to stop you?"

St. Paul Police say robberies across the city are down 15 percent. In the western district, where the restaurant is located, there’s been a slight increase.

"We’re just one restaurant. Everybody I’m talking to around us is being robbed," said Ingram. "Our officials—its crickets. We’re not hearing anything from them."

Ingram said he’s tried to make contact with the city council member who represents the neighborhood, Dai Thao, with no response. Thao’s office did not respond to Fox 9’s request for comment.

After posting, Ingram received a call from Mayor Melvin Carter. In a statement he said:

"The safety concerns the pandemic has brought demand action… I am working closely with impacted community members and Police department leadership alike to adjust our public safety strategies to meet this unprecedented moment."