A deadly crash in St. Paul is shining a light on a growing problem both in the Metro and nationwide: the thefts of Kias and Hyundais.

ST. PAUL, Minn. (FOX 9) - A deadly crash in St. Paul is shining a light on a growing problem both in the Metro and nationwide: the thefts of Kias and Hyundais.

The community is remembering 70-year-old Phoua Hang, who was killed in a crash Sunday evening near Forest and Magnolia. St. Paul Police said she died after the car she was in was hit by a Kia Sportage, which was stolen out of Minneapolis.

Hang's grandson, Rep. Jay Xiong shared a tribute on Facebook, writing in part, "I'm at a loss for words." His colleagues sent their condolences.

"I know some members of his family. And it's devastating for any community to lose its elders, in particular. There's a lot of power and wisdom in our Hmong communities that come from our elders," said Rep. Carlos Mariani (DFL-St. Paul), who chairs the House Public Safety Committee. 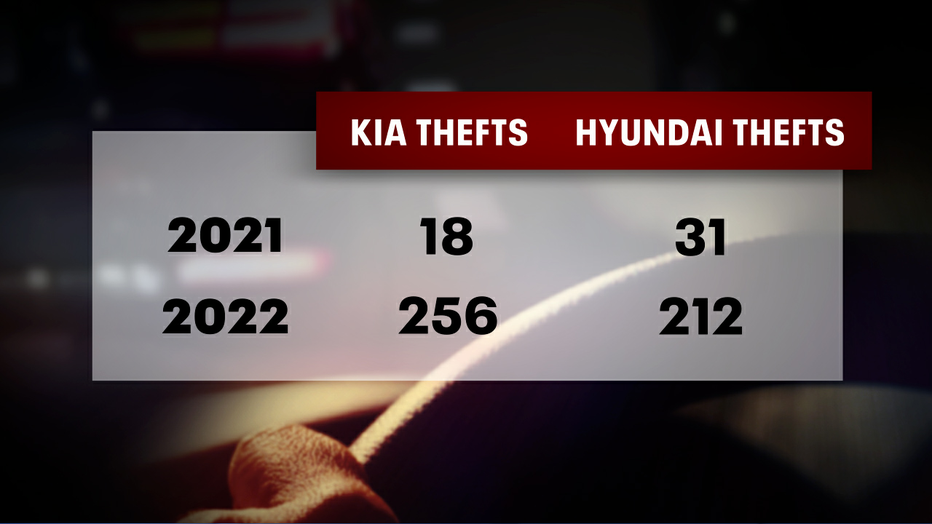 The Ramsey County Sheriff's Office called the thefts an "epidemic."

"It's really shocking how many times a day we're seeing reports of Kias and Hyundais, specifically, driving through neighborhoods, high speeds of 70, 80, 90, 100 miles an hour through residential streets four or five times an hour, (in) different cars," said Alex Graham, deputy sheriff of Ramsey County.

He said the alarming thefts started to ramp up in the Metro in December, and have "exploded" in the last three to four months. The cars are stolen throughout the entire area during all parts of the day.

Graham explained these specific makes are easier to steal because of what he called a "manufacturer's defect." The vehicles were made without engine immobilizers, an electronic security device that make it more difficult to start a vehicle without a key.

"If you strip the ignition column, there's a piece that pops off and you can stick a USB drive, a knife, or something like that. Well, think about how many people charge their cell phones in their cars. The exact part they need to steal that car is featured in most people's cars," Graham said.

Graham said locally, the offenders are typically juveniles, who break the car's back window and can steal the car within seconds. He calls the thefts a "status symbol" for these young people.

"They'll do donuts in front of police agencies they know can't pursue, and they're jumping out of the car posing with a camera taking a Snapchat photo," he explained.

Kias and Hyundais up until model year 2022 are affected.

St. Paul police encourage vehicle owners to invest in alarm systems and steering wheel locks, in addition to their usual advice of not leaving cars running or unlocked.

Mariani said he has had conversations with local law enforcement, and he would like to see car thefts addressed from a legislative standpoint.

Lawmakers proposed a glut of new money for police departments this year to address car thefts and other crimes, but those discussions -- like so many others -- failed in end-of-session negotiations.

Graham is also asking anyone who sees careless or reckless driving to call 911.

"It's not just a Minneapolis problem, not just a St. Paul problem. It's a Metro-wide problem. We all need to band together as Minnesotans to really work together to stop this," Graham said.

He called on the manufacturers to find a fix to the problem soon. There have been pushes in other parts of the country, specifically Milwaukee, for Hyundai and Kia to recall the cars affected.

FOX 9 reached out to Kia about the deadly crash. The company sent Fox 9 a statement saying:

"Kia America is aware of the rise in vehicle thefts of a subset of trim level vehicles in your area. As of the current 2022 Model Year, all Kia vehicles have an engine immobilizer fitted as standard. All Kia vehicles for sale in the U.S. meet or exceed Federal Motor Vehicle Safety Standards. Kia customers with questions regarding their Kia vehicle should contact the Consumer Assistance Center directly at 1-800-333-4542 (4Kia).

FOX 9 reached out to Hyundai. The company sent Fox 9 a statement saying: "Hyundai Motor America is concerned with the rise in local auto thefts. The safety and well-being of our customers and the community is and will remain our top priority. These vehicles meet or exceed Federal Motor Vehicle Safety Standards and engine immobilizers are standard equipment on all new Hyundai vehicles. Hyundai customers who have questions can always contact the Hyundai Consumer Assistance Center at 800-633-5151."