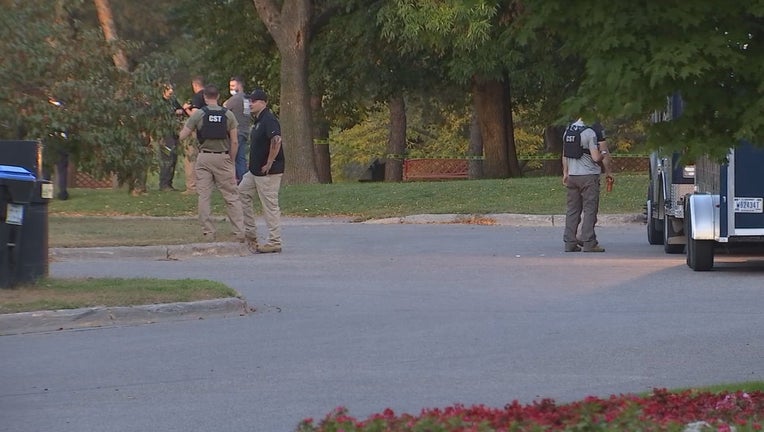 ROSEVILLE, Minn. (FOX 9) - A man is facing charges of attempted murder and assault after police say he exposed his wife to a toxic chemical this week in Roseville, Minnesota.

A man is facing charges of attempted murder and assault after police say he exposed his wife to a toxic chemical this week in Roseville, Minnesota.

Officers say MacBain attacked his former wife this week when the two met up for a custody visitation meeting at Central Park in Roseville.

The former couple had two children together but divorced in 2013. Police say on Wednesday, MacBain was playing with squirt guns while his ex sat nearby on a park bench. The victim told police she stayed at the park because she didn't trust MacBain to return with the kids after the visitation.

During the meeting, MacBain went into the bathroom. When he came out, he told officers he squirted her with the water gun.

However, the victim told officers MacBain actually poured a liquid onto her from a bottle. She said the liquid didn't feel or smell like water. She licked the liquid from her hand to determine what it was and said it had a spicy flavor.

Police say one of the children was nearby when his mother was splashed and reported the liquid seemed sticky and he developed a taste in his month like pepper. Officers say the other child was also splashed slightly with the liquid but neither child developed serious symptoms as a result.

MacBain's ex-wife, however, started feeling sick immediately. She quickly had a reaction and felt like she was going to lose consciousness. Police say MacBain tried to leave but couldn't because the children had taken his backpack. His wife tried to call 911 but was unable to speak. MacBain ended up calling 911 but claimed she was having a panic attack.

Before and after the 911 call, the children told police that MacBain appeared to be unconcerned about his ex's medical episode but sounded concerned while on the phone with operators.

At the hospital, the victim's condition worsened and a specialist doctor said she showed symptoms of being poisoned with an organophosphate. Police say organophosphates include pesticides and nerve agents like Sarin that can be inhaled or absorbed through the skin.

The victim later told police that MacBain had talked about poisons in the past, and at points believed his father and others had tried to poison him.

MacBain was arrested while leaving his apartment for a walk with his current girlfriend. After being told she couldn't return to the apartment while a search warrant was being prepared, police say MacBain's girlfriend asked why and told police: "There are no chemicals or bombs" inside the apartment.

Friday, officers searched MacBain's apartment on Asbury Street in St. Paul. Due to the potential hazardous nature of the search, crews from the FBI's Hazardous Evidence Response Team, the Minnesota National Guard, and St. Paul police and fire assisted with the search. It's unclear at this time if any hazardous materials were recovered from MacBain's residence.

On Thursday, officers also searched Central Park and determined there was no further threat to the public. Roseville’s Trisha Stefanski and her young kids are frequent visitors at Central Park. A community hub of sorts, the park was buzzing on Friday with young and old enjoying the pleasant fall weather.

But for some, including Stefanski, this week’s unthinkable attack that apparently unfolded at the park was top of mind.

"It feels like a park, a nice neighborhood park," said Stefanski. "So you start to look around and kind of wonder if there are other things that could happen, and the safety."

Stark is the senior Director of Housing and Youth Development at Tubman, a Twin Cities agency providing assistance to those who’ve been victims of relationship violence.

The organization is reporting an overall spike in domestic violence during the pandemic, and perhaps more frighteningly, stark says the level of injury has increased.

A potential chemical attack during a custody visit serves as a tragic example.

"Sadly, expect the unexpected in these circumstances," said Stark. "Don’t ever feel you’re overreacting. I think people who are causing harm to themselves or others, we want them to know the science when they are at these points, and to get help."