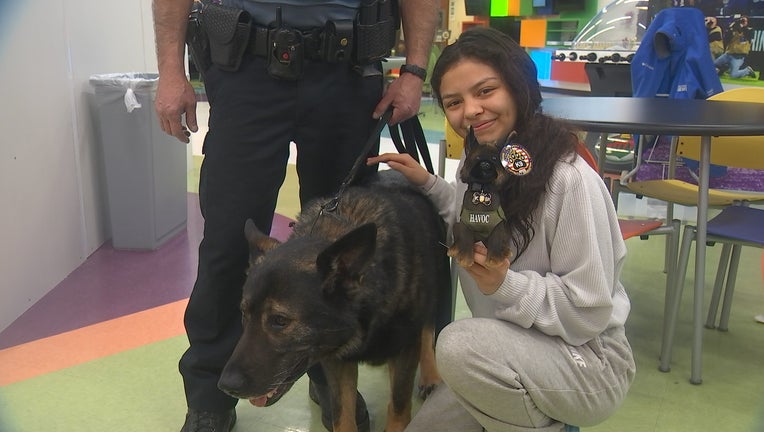 In the final days before retirement, K-9 Havoc along with Officer Jay Curiel made one last stop at Children’s Minnesota.

In the final days before retirement, the German shepherd along with Officer Curiel made one last stop at Children’s Minnesota.

“Extremely fulfilling,” said Officer Curiel. “It reminds you that some of the little things in life that may upset us when we’re outside the hospital are really nothing compared to what some of these kids are going through.”

K-9 Havoc touched the lives of hundreds of children, like Aubrey, who returned to celebrate his milestone after spending time at the hospital last spring.

“She heard he was retiring and she says, ‘Well do I get to adopt him?’ and I said, ‘No he’s just not going to work anymore,’” said Alisha Kennedy, Aubrey's mother. “And she was excited to be able to come and see him.”

“He is the big teddy bear and I think that they sense that when they see him, because his demeanor is just so calm and relaxed,” said Officer Curiel. “Like he’ll literally jump in bed with the kids, which just makes him ecstatic.”

From crime fighting to bringing smiles to the faces of young patients, as his career winds down K-9 Havoc is being recognized for a job well done.

Havoc’s last day will be Friday. He will then become the department's house dog, where he'll enjoy days eating ice cream and biscuits.