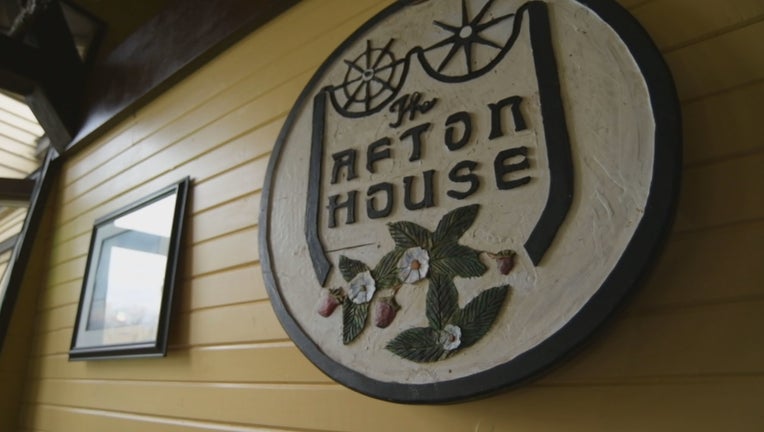 Guests may not be the only ones staying the night at the Afton House Inn. (FOX 9)

AFTON, Minn. (FOX 9) - The Afton House Inn is known for its fine dining and vintage charm, but among some employees and guests, the 152-year-old getaway is gaining a reputation for its spirited surroundings.

As day turns to night, decorative ghosts and goblins may not be the only spirits staying at the historic hotel.

Spirits awaken for haunted happenings at the Afton House Inn

The Afton House Inn is known for its fine dining and vintage charm, but among some employees and guests, the 152-year-old getaway is gaining a reputation for its spirited surroundings.

"We get quite a few reports that there is something going on here other than the ordinary," said Justin Glover, the Afton House Inn general manager.

The Afton House Inn was originally built to cater to railroad workers, lumbermen and travelers in 1867 by Civil War veteran Charles Cushing when he returned from the war. Since then, it has been everything from a boarding house to a restaurant and it is on the National Register of Historic Places.

"It is a unique piece of architecture from that era,” said Vicki Winge of the Afton Historical Museum. “From that standpoint it is important."

Now, in any building that is more than 150 years old, there are creaky doors and squeaky floors, but some employees believe there is more going on at the inn than simply things going bump in the night.

"I never really thought about haunted places until I worked here," said Lynn Williamson, a longtime waitress at the Afton House Inn.

In the main dining room, the table settings were tampered with so much after hours one night, Williamson was definitely un-settled.

"I kept finding forks [turned],” said Williamson. “Over and over and over again. At tables no one even sat at that night. I finally yelled at them to stop, ‘Please I’m tired of this’ and it did stop. Then it started up again and I yelled again. It hasn't happened since, but it will probably happen again now that I'm talking about it."

Also, in Room 23 where furniture was frequently moved by someone other than hotel staff.

"We used to have a situation where our housekeeper and owners would where they would go up to that room and get it ready for guests to stay,” said Glover. “The morning would come and the guests were about to arrive and the bed would be pinned up against the wall. So regularly, they'd have to go up and pull the bed from the wall and start the cycle all over again."

"None of the windows were open,” said Sarah Quinn of the Afton House Inn. “There were no doors open. No suspicious activity other than frame having flown halfway across the room."

Last year a mother and daughter came to the front desk asking about a strange sound in the middle of the night.

"They both recalled they could hear a baby crying as they walked down the hallway to their room,” said Quinn. “All throughout the night. I was speechless. I told them there are no infants. I don't know what else to tell you."

Employees believe the hotel may be haunted by the ghost of Mary Pennington, who used to host fried chicken dinners there for $1 in the early 1900s. Another spirit could be the former innkeeper, Eric “The Builder” Erickson, who made the spiral staircase and other woodwork around the inn.

"We just had a psychic here who said she could smell the sweetness of a vanilla cigar and she said there was a man named Charlie who liked to hang out in the hallway on a regular basis and look for his wife," said Glover.

Far from scaring customers away, employees say most visitors are interested in the inn's un-invited guests.

"They are not mean,” said Williamson. “I think they are just having fun with us. So you gotta have fun back.”

After all, regardless of whether the Afton House is haunted or not - who doesn't like a good ghost story?

"I don't think the spirits are necessarily bad,” said Quinn. “I think they want attention and they want to be acknowledged and I think by having all these weird things happening. It kind of keeps their memory alive."

The general manager says ghost hunters have been to the inn to document any paranormal activity and left convinced spirits were there. Years ago, the owners buried crystals in the backyard to ward off any evil spirits.