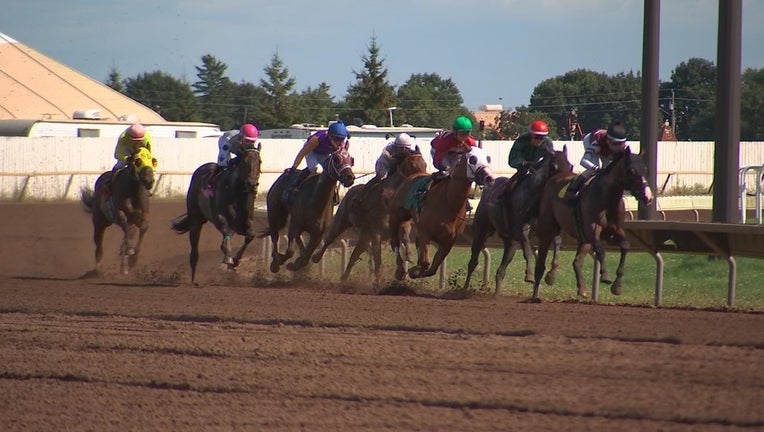 His two sons, Patrick and Alex, practically grew up there and today are successful jockeys.

The Minnesota Racing Commission levied fines and suspensions against horses that tested positive, but a FOX 9 investigation shows human methamphetamine use could be the culprit for the positive tests.

Canchari lives only two blocks away from Canterbury, but pride now keeps him away.

His reputation took a hit in 2014 when his horse, Smart Masterpiece finished second and Canchari was approached by the steward.

It was the same methamphetamine that’s a common street drug, also known as speed.

Smart Masterpiece was disqualified. Canchari was fined $2,000 and suspended for 90 days.

Then, three years later, in 2017 another Canchari horse, Carson’s Storm, tested positive for methamphetamine. It was a microscopic, trace amount: 126 picograms (per mil of blood). A picogram is one trillionth of a gram.

This time, the Minnesota Racing Commission dropped the hammer: a $25,000 fine and a three year suspension. The penalty, which was upheld by an administrative judge, was later reduced to $10,000 and one year.

“No one comes to a track to watch horses running with meth in their system,” said Tom DiPasquale, executive director of the Minnesota Racing Commission.

“It has a high potential to effect performance in a horse and has no purpose in a horse, so as a class one violation, it’s the most serious offense in racing,” DiPasquale said.

Under the Minnesota Racing Commission’s zero tolerance policy, the trainer is ultimately responsible for the welfare of the horse. Canchari had to essentially prove his innocence.

“This is not a criminal trial and fault is not required, and that’s what Mr. Canchari has misunderstood,” DiPasquale said.

The commission’s view is while Canchari may not have intentionally given methamphetamine to the horses, he failed to protect them from exposure.

Another trainer, Shane Miller, had a horse test positive in 2017. He paid his fine and left racing.

It also happened to Mac Robertson, the most successful trainer in Canterbury Park’s history. He had a horse test positive in 2015.

Both Miller and Robertson tell the FOX 9 Investigators they believe their horses were contaminated by methamphetamine users working behind the scenes at Canterbury.

At horse racing tracks around the country there are a scattering of positive methamphetamine tests every year.

“It is not that common. In any given year, there may be a half dozen findings out of 10,000’s of post-race tests,” said Dr. Mary Scollay, executive director of the Racing Medication and Testing Consortium, based in Kentucky.

There are no studies testing the effect of methamphetamine on horses because it would be unethical to conduct such research. But, like humans, the prevailing belief is methamphetamine could cause an irregular heartbeat, which could result in atrial fibrillation, the most common cause of fatalities among race horses.

Dr. Scollay says on a practical level, it is perception that matters.

“I don’t know how much medication it takes to gain or lose fractions of a second, but if I am the one who runs second to a horse that has meth in its blood, I am going to say I was cheated,” she told the Fox 9 Investigators.

How could the drug be transmitted to horses?

“I think it is probably an incidental transfer from a human substance abuser, likely through contact with the human hands to the horse’s mucus membranes,” Dr. Scollay said.

In other words, someone smokes methamphetamine, then touches the horse near the nostrils.

Others speculate it could happen if a methamphetamine user urinates in a stall or washes their hands in the horse’s water bucket.

AT THE STARTING GATE

Canchari said after the second positive result, all of his employees took drug tests and passed. Canchari even took a voluntary polygraph.

He believes his horses could have been contaminated by the starting gate crew. It’s the one part of the race a trainer has no control over.

A month after Canchari’s first horse tested positive, Shakopee Police arrested two members of the starting gate crew, Dustin Matthew Shanyfelt and Devin Lynn Stortzum, both of whom were in possession of methamphetamine.

In a dorm room behind the track, police found a gram of methamphetamine, a pipe used to smoke it, a scale, and a bottle containing urine to falsify a drug test.

And they were not alone, the Fox 9 Investigators discovered at least five other horse handlers at Canterbury busted for drugs during this period.

A stable worker, Helene Elizabeth Bowen, was caught with a ball of meth, as well as morphine and oxycodone. A jockey from Iowa, Siegmore Richard Karl Golibrzuch, has a small amount of methamphetamine in his locker, along with a device used to shock horses during a race. And exercise walker, Scott Russell Hawkins, was arrested with methamphetamine near Canterbury in 2015. He also lost his license in Oklahoma for testing positive for the drug.

But the Minnesota Racing Commission granted him a license anyway, even though the stewards determined he was “unfit for licensure due to his history of methamphetamine use.”

When Canterbury Park tried to randomly drug test the starting gate crew in 2017, a half dozen members quit and left a month early for a track in Arizona.

“The trainer who has the most responsibility for the horse has to hire the right people,” DiPasquale said.

According to the Minnesota Racing Commission, Canchari didn’t do enough to protect his horses. They pointed to the odds of this happening to one trainer.

“No one wants to see horses racing on meth; it is animal abuse or neglect. Either way, our first responsibility is to protect the horse,” DiPasquale said.

But others say how the horse was contaminated is a mitigating circumstance.

“It has been the basis of horse racing, someone has to be responsible for the horse, but we live in a more complicated world than perhaps when the rules were written,” Dr. Scollay added.

For Canchari, that means reputation, will always place second.

“When I die, I’m going to die with nothing like all the jockeys and the trainers,” he said.

At 62, he’s broke and had to sell his nine horses. But, he can’t imagine returning to Canterbury Park until he gets his reputation back.

“I refuse to go. When I go, I want to run with my horses. I’ll be happy man, and my life will come back again,” Canchari said.

Earlier this year, an administrative law judge upheld the racing commission’s discipline of Canchari, but he still refuses to pay his $10,000 fine.