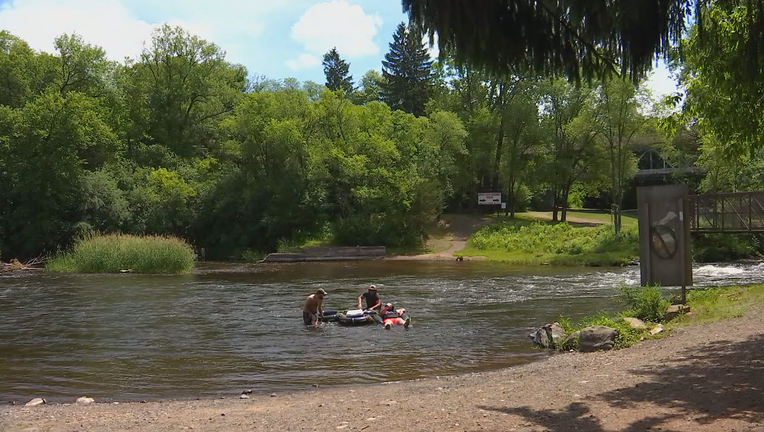 SOMERSET, Wis. (FOX 9) - There’s a tubing spot in Somerset, Wisconsin that a lot of people are fighting to keep.

Last month, the Somerset Village Board voted to put a stop to the rental tubing businesses by restricting a spot the companies retrieve their guests from the river.

A newly formed group is fighting to keep an tubing exit spot along the Apple River in Somerset, Wisconsin.

The people of Somerset are not giving up their fight to keep this exit spot along the river in Village Park, but it goes beyond just tubing.

“We have thousands of people who come from all over every weekend,” said Mike Kappers, of the Apple River Hideaway. “Iowa, South Dakota, North Dakota, Minnesota, Wisconsin and all over Canada.”

Tuesday, the community gathered to save that legacy.

“We are going to work to unite the community and basically take our town back,” said Kappers.

Kappers is worried a recent ordinance approved by the Village Board will threaten his tubing business.

“The Apple River will not be closed down. We are going to make sure it won’t be. It’s been a huge part of our community,” he said.

The ordinance says, as of Oct. 1, tubers can no longer exit at Village Park. It will impact Kappers’ customers and Steve Kaufman’s, who owns River’s Edge.

“There’s been an outcry of support for us that I’ve been amazed at and brought us here today,” Kaufman said.

That rallying cry led to the online group “We Are Somerset.” It’s made up of community members who want to see change that goes beyond the river.

“We hope that will be a catalyst to something bigger and better than just tubing. That was where it started, but I think it’s something much bigger than that now,” Kaufman said.

Part of the change could be with Somerset leadership. The group filed campaign papers with the Village and is looking to unseat three board members in a recall election. Tuesday, the group worked to gather signatures on recall petitions.

“And hopefully, after meetings like this, as fast as they changed it, I hope - I’m confident, hopeful, optimistic - they might change in back,” Kaufman said.

FOX 9 reached out to all seven Village Board members for reaction to the recall petitions, but haven’t heard back yet.

The Somerset City Clerk said the group needs 220 signatures to move the process forward. If that did happen, it would most likely still be several months before a recall election would happen.