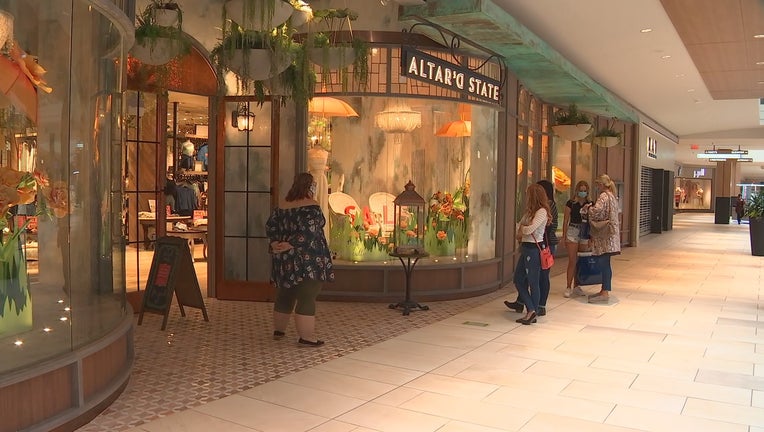 Shoppers at the Rosedale Center wait outside a store, where there is a 10-person capacity limit. (FOX 9)

ROSEVILLE, Minn. (FOX 9) - For the first time in months, retailers in Minnesota were allowed to reopen doors to customers at half capacity.

On Monday, Rosedale Center opened their east entrance only as a way to monitor the number of shoppers. Mike and Gail Ball very cautiously came out to shop because, they feel, this is overdue.

It was the first day retailers were allowed to reopen and they were met with small crowds.

“I don’t think this virus is going to go away and we can’t stay in our houses and people not working,” said Gail Ball of Oakdale.

Rosedale reopened with 22 stores of 120. Others are still preparing, but mall officials are anticipating 80 to 85 percent of the stores will be open in the next two weeks.

Shoppers Holly and Eva Ernst were entirely fine waiting at a store, which was allowing ten shoppers at a time.

“I feel like there’s a safe way to do it and a smart way because this is real,” said Holly Ernst of North Oaks.

Retailers in Minnesota were allowed to reopen doors to customers at half capacity.

“I mean a lot of people are wearing masks, so that’s really helping a lot, I think, and also there’s having social distancing in stores, for example, like we’re in line right now and there’s also some really good deals, so that’s a pro!” said Eva Ernst of North Oaks.

In Minneapolis, the owner of Queen Anna clothing store said the reopening day was unexpectedly emotional.

"I literally cried when I put this sign out," said Nicole Jennings.

After being closed for nearly two months, Jennings reopened as soon as she could, but the first day of shopping proved anti-climactic.

It could have been the fact that it was Monday or that the weather was gloomy, but Jennings knows it's probably because some people are still a little hesitant.

"It's almost like, we're free, let's figure out the next steps we're going to take and I can't say that retail is going to be on their first to do list," she said.

Jennings said she is watching shopper closely, wiping down everything they touch and steaming clothes they have tried on. Masks and hand sanitizer are also provided in the store.

In Uptown Minneapolis, it was much of the same for Nicole Granovsky, who was a rare shopper.

"It was just weird because you don't want to touch any of the clothes, but there's no one in there, so at least you didn't feel the pressure," she said.

She said she and her friend didn't linger too long when they entered stores.

"It would be sad to walk into a store and contract it that way after months of sitting at home," she said.

At the Twin Cities Premium Outlets in Eagan, eight stores reopened and 14 more are planning to do so within the week. A half dozen, so far, are offering curbside pickup.

Not all malls across the state have opened just yet. The Mall of America announced it will be reopening its retail stores on June 1.