Multiple agencies on scene of incident in Mounds View, Minnesota

Multiple agencies including the Minnesota State Patrol, Bureau of Criminal Apprehension and Ramsey County Sheriff's Office are on the scene of an incident in Mounds View. Aerial footage appears to show a fence knocked down.

MOUNDS VIEW - A deputy rammed a man with his squad after the sheriff's office says that man opened fire on the deputy Wednesday morning in a Mounds View, Minnesota neighborhood in an incident that followed a 911 call.

The sheriff's office says the incident started around 10:40 a.m. when they were called out to a hotel on the 2200 block of Mounds View Boulevard for the report of a domestic assault in which a gun had been fired.

Police: Man dies after being rammed by squad in Mounds View as shots were fired at deputy

A deputy rammed a man with his squad after the sheriff's office says that man opened fire on the deputy Wednesday morning in a Mounds View, Minnesota neighborhood in an incident that followed a 911 call.

When deputies arrived, they learned the suspect in the case had been last seen near a restaurant south of the hotel. After a search, deputies say they found the man about a mile to the north on the 5200 block of Pinewood Court. As deputies pulled up, the sheriff's office says the man raised his handgun and fired at the approaching squad. Deputies say bullets struck the squad just above and below the driver's side of the windshield.

At that point, investigators say the deputy who was fired upon "used his vehicle to stop the threat." 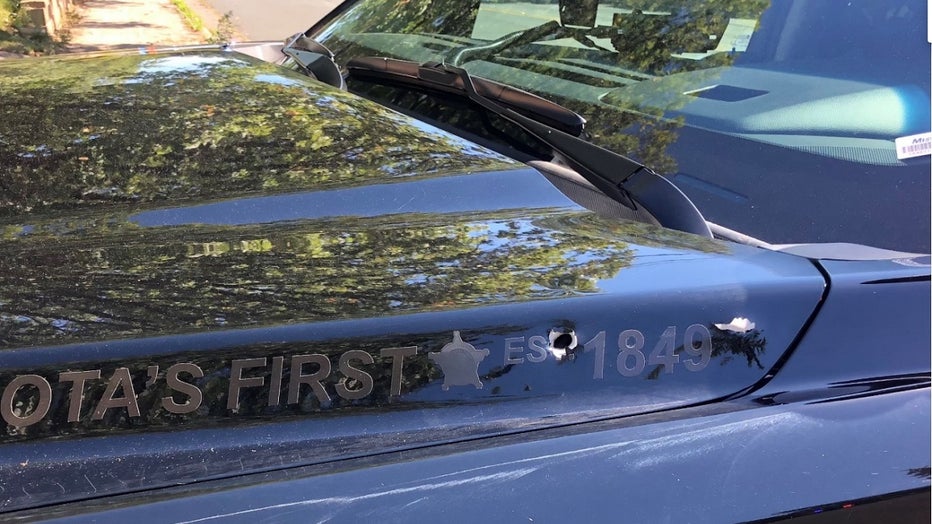 This photo released by the Ramsey County Sheriff's Office shows what they say is the bullet damage to the squad.

A witness who works at a car dealership across the street from where the incident occurred told FOX 9 he saw a person running and shooting at a law enforcement officer in a squad car. He then saw the officer hit the man with his squad, sending the gunman through a nearby fence.

After the man was hit by the squad, deputies say they rendered aid, and he was rushed to Hennepin County Medical Center. The man's condition wasn't immediately released by Ramsey County deputies but the Mounds View Police Department says the man has since died from his injuries.

Deputies say a cocked handgun was found at the scene. They released photos of the said gun along with holes in the hood and roof of the squad. 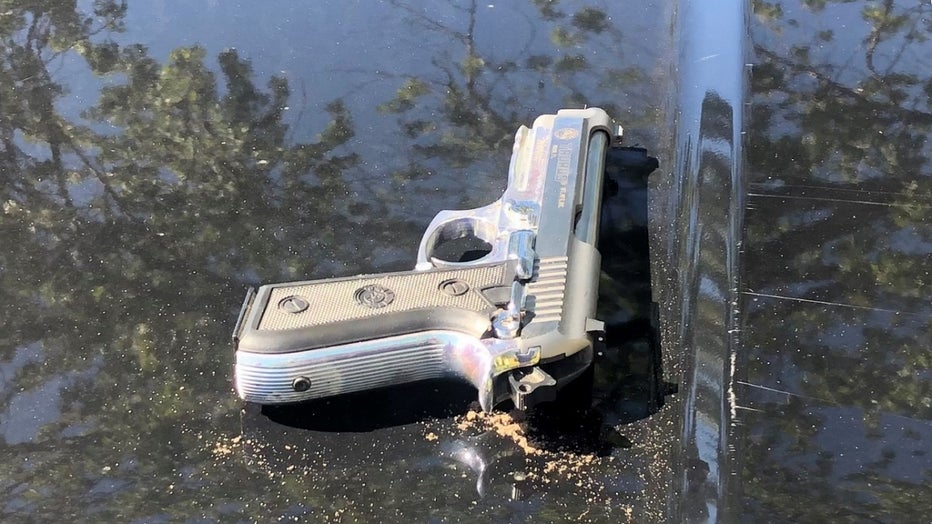 Deputies say this was the gun that was recovered from the scene along Pinewood Court in Mounds View.

The sheriff's office says it is investigating charges against the man as the Minnesota Bureau of Criminal Apprehension works to determine if the deputy who hit the man acted properly.