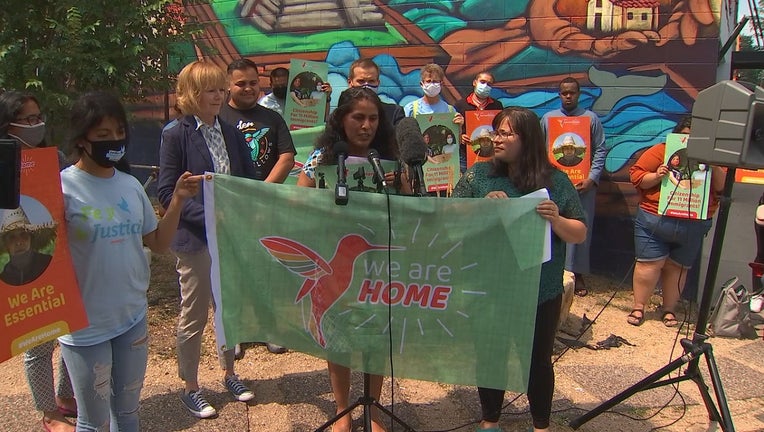 MINNEAPOLIS (FOX 9) - U.S. Senator Tina Smith was in town on Friday to detail her push to create a pathway to citizenship for essential workers.

Businesses leaders, frontline workers, and immigration advocates joined the senator Friday afternoon at Mercado Central in south Minneapolis. According to Smith, it's estimated that more than 5 million undocumented essential workers across the country continued to work during the pandemic. They filled positions in critical industries such as health care and agriculture.

U.S. Senator Tina Smith was in town on Friday to detail her push to create a pathway to citizenship for essential workers.

"Essential workers have always been critical to our overall economic growth and health," said Jenny Srey with the Coalition of Asian American Leaders. "And as we move forward toward healing they are even more vital now. We need all of our lawmakers to recognize the sacrifices and important role of immigrant workers and use their power to make citizenship a part of the budget reconciliation process."

Senator Smith is pushing to pass the Pathway to Citizenship Act that is being led by California Senator Alex Padilla. Supporters believe that this legislation is key to moving immigration in America forward.

"And we thanked essential workers right?" said Senator Smith. "We put signs in our yards thanking them. We called out their service and sacrifice as we should have, but now we need to do more than offer thanks. Now we have to offer a solution to our nation’s broken immigration laws."

Senator Smith says the Pathway to Citizenship Act would affect the lives of millions of undocumented workers. The legislation is currently being debated in the Senate.